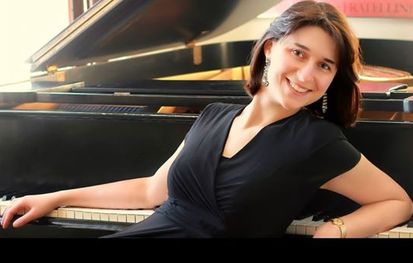 For the outstanding young pianist/composer Laura Dubin, the serious pursuit of jazz expression began at the age of 13. Studying classical piano since the age of six in her native Rochester, NY, annual visits from her California-based pianist uncle David Dubin also acquainted her with the blues. At ten she discovered a copy of the Charlie Parker compilation, Talkin’ Bird in her parents’ record collection and things began to connect. Three years later she began studying jazz piano with Peruvian-born Richard Delaney, who gave the young pianist her first serious exposure to Latin music. But it was his suggestion to Laura in her first lesson that she check out Oscar Peterson’s West Side Story album that locked everything into place… and she was off and running.

At 16, another key development occurred with a lesson from Fred Hersch, who recommended that she partake in the exemplary music program at Western Michigan University, where her primary piano teacher was the eminent educator Dr. Stephen Zegree. On her way to attaining her Bachelor of Music Degree in Jazz Studies there in 2011, Laura was one of the most active and respected student musicians at the university and in local venues all over Kalamazoo. A visiting professorship by Fred Hersch further developed the mentoring relationship, which continues to this day. Laura also performed a pair of duets with the world-renowned pianist at his Kalamazoo concert, Fred Hersch & Friends.

Another key experience was leading the group that accompanied WMU’s highly regarded vocal jazz ensemble Gold Company. Highlights included concerts for Jazz at Lincoln Center with guest vocalists Janis Siegel in 2010 and Mark Murphy in 2011; and two other major events in Kalamazoo: with Kurt Elling for his Jazz Masters at Miller concert; and a commencement event with President Barack Obama as guest of honor – both taking place in 2010. She also performed at the 2010 Detroit International Jazz Festival as a member of the WMU Jazz Orchestra with featured guest, saxophonist Bobby Watson. Laura began her serious explorations of Latin Jazz as a member of WMU’s Afro-Cuban/Brazilian jazz ensemble Mas Que Nada from 2009-2011. Key events included performances featuring percussionist Jamey Haddad and trumpeter Michael Phillip Mossman; and consecutive DownBeat Student Music Awards in 2010-11. She is on the group’s self-titled 2013 recording, as well as Gold Company’s 2011 album, Who Could Ask for Anything More?

Laura’ professional activities hit full stride even before her 2011 graduation with her selection as one of eight pianists to participate in the Mary Lou Williams Women in Jazz Festival as part of its Emerging Artist Workshop in May 2011. Here she also performed solo and with bassist Noriko Ueda and drummer Sylvia Cuenca on the Millennium Stage of the Kennedy Center in Washington, D.C.

Shortly afterward Laura began a 15-month stretch in a jazz trio on three Holland America Line cruise ships, where she met and performed with her husband and drummer Antonio H. Guerrero. At the conclusion of these tours in November 2012, Laura moved to Mexico City. Together with Antonio and a few different bassists, Laura worked consistently in and around Mexico City, including major venues such as Anfiteatro Simon Bolivar, Palacio Bellas Artes and La Fiesta de la Musica “Coyofest.”

Seriously focused upon composing and arranging since 2008, Laura has created more than 40 pieces for solo piano as well as small and large ensembles, citing Horace Silver, Dave Brubeck, Fred Hersch and Claude Debussy among her deepest influences. As a player, she names Peterson, Hersch, Charlie Parker, Bill Evans, Red Garland, Vince Guaraldi and Wynton Kelly among her models.

In 2013, Laura recorded her first CD Introducing the Laura Dubin Trio featuring Antonio and bassist Sam Weber, performing 10 of her original compositions. The CD was released in November of 2013, and celebrated with a performance in her hometown of Rochester, where Laura is currently based. Her latest album, Laura Dubin Plays the Great American Songbook, will be released in May 2015.

Deeply focused, highly motivated and inspired by some of the most powerful spirits in the jazz legacy, Laura Dubin is ready to take her place as an important contributor to that profound tradition.