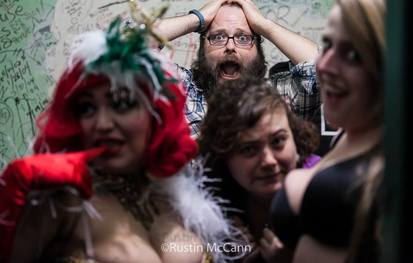 Tim Cornett is headlining the beautiful BOP STOP in the Cleveland's Hingetown as part of the Cleveland Comedy Festival Series. A Cleveland staple, Tim Cornett provides one of the most unique comedy shows you are going to see!

Tim Cornett is funny in the same way a clown dressed like a hobo is. An American icon replacing both Mark Twain in folksy cleverness, and Elvis Presley in raw sexual energy. Tim has accepted many compliments, from “you are funny” to “You are very funny” and the fact that he accepts these compliments with grace instead of laughing the way you do when someone states something stupidly obvious, is a mark of what a wonderful person he is. Originally from Cleveland. The Tim Cornett Experience consists of High Energy Wit that alternates between the silly and sublime, where the audience gets a moment to experience the world through Tim's stunning blue eyes. Tim has taken a seldom tread path in comedy, instead of moving from club to club, as most comics do. Tim opted to move from city to city, spending his time absorbing how people laugh on a regional level, in some of the great American cities Including Las Vegas, NV. Los Angeles, CA., Portland, OR. and Louisville, KY. Tim Cornett or “The He-Man from Cleve-Land” has been featured on many radio and newspaper outlets across the country. Tim has been interviewed for the prestigious Comedians magazine, and has a sure to be platinum comedy CD that will win many awards once it is recorded