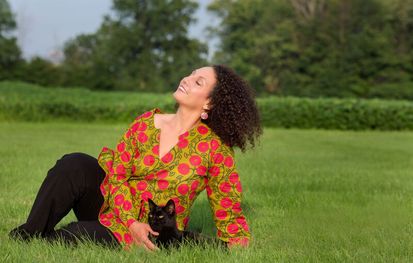 Kim Nazarian is the soprano and one of the founding members of the New York Voices. She has recorded, performed and toured the world with this outstanding vocal ensemble for the past twenty seven years. Her voice is featured on several MCG Jazz releases (mcgjazz.org), among them "Afternoon In Rio" with Joe Negri, (yes, Mr. Rogers’ Handyman Negri!) "The 21st Century Swing Band," the highly acclaimed "A Nancy Wilson Christmas," and "Long Ago And Far Away," her original, interactive children's program.

Aside from her work with MCG, Kim was a featured vocalist alongside Ray Brown and Stanley Turrentine in the Pittsburgh Ballet Theatre’s production of "Indigo In Motion" and has appeared with the Pittsburgh Children's Festival Chorus. She has taught at Duquesne University and the Ellis School, recorded with the Big-Band at Slippery Rock University and continues a busy schedule in her private studio at home in OH. Kim has also recorded "Red Dragonfly In New York” for JVC in Japan. The album contains Japanese folk songs translated into English and western musical contexts. As a singer and lyricist for such artists as Masahiko Osaka her work has won the “seal of approval” by Japan’s Swing Journal.

Always passionate for Latin Music, Kim performs and records with Boston-based El Eco, whose album “Two Worlds” was featured on NPR’s JazzSet. Other collaborations include her work performing and recording with Mark Shilansky, her vocals featured extensively on his recording “Join the Club.”

In New York, Kim continues work as a session singer, with credits including jingles and major motion picture scores. Also in the works is an educational book/DVD covering her critically acclaimed approach to vocal technique, solo and ensemble singing, and musical sensibilities for singers. A magna cum laude graduate from Ithaca College with a Bachelor in Fine Arts in Acting, she is now the Artist in Residence for the Bowling Green State University Vocal Jazz Program, Tri-C Community College, and part of the Voice Faculty for Ithaca College where singers from classical, jazz, and contemporary realms alike benefit from her knowledge and experience.