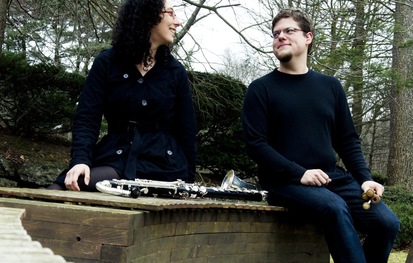 Praised by the Boston Globe as "superb", the dynamic bass clarinet/marimba duo Transient Canvas has been blazing its own trail in the world of contemporary music since 2011. In four years they have premiered over 40 new works, essentially creating an entirely new repertoire for their unique instrumentation. Their 2014-15 season included featured performances on the first annual New Music Gathering in San Francisco, the Firehouse New Music Series in Brooklyn, a collaborative concert with Chamber Cartel and the artwork of Igor Korsunskiy in Atlanta, and the Original Gravity Concert Series which pairs local composers with local beers in Boston.

Clarinetist Amy Advocat is an avid performer of new music, having performed with Callithumpian Consort, Firebird Ensemble, [sound icon], Boston Modern Orchestra Project, the New Fromm Players at Tanglewood, Boston Microtonal Society’s NotaRiotous, Glass Farm Ensemble, and the Second Instrumental Unit. As a passionate supporter of musical innovation, Amy was a featured guest at the 2010 inaugural Bohlen-Pierce Symposium in Boston, during which she premiered six new pieces for the newly invented Bohlen-Pierce clarinet. This instrument plays in a non-octave-repeating tuning system, and was the basis of Amy’s doctoral studies at McGill University in Montréal.

Marimbist/percussionist Matt Sharrock is a mover and a shaker tirelessly championing the works of living composers. Always looking for innovative ways to connect with new audiences, he melds drama and music with his solo project Narratives and rides the line between rock band and new music ensemble as a member of the Boston Percussion Group. Matt has also performed with some of New England’s finest ensembles, including [sound icon], Boston Musica Viva, and the Portland Symphony Orchestra, and serves as Music Director for the EQ Ensemble. He holds degrees from The Boston Conservatory and Baldwin Wallace University Conservatory of Music.

The program for the November 12 concert is as follows: