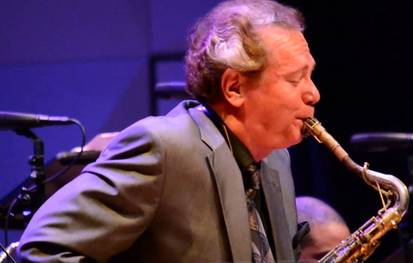 No doubt about it, Ernie Krivda is one of the originals of the tenor saxophone” wrote Bill Donaldson for Cadence Magazine about the legendary jazz musician whose 6 decade on the music scene is already filled with a new burst accomplishment with across the board critical acclaim for his 2011 CD, "Blues for Pekar." The Capri Records release was dedicated to the late Cleveland author and jazz commentator, Harvey Pekar, who had proclaimed Krivda as “one of the best jazz tenor men in the world.” This recording came right on the heels of two other highly acclaimed CD’s, "Live at The Dirty Dog" and "November Man" (both on CIMP). These recordings continue a period of intense activity, achievement and recognition. In 2009, Ernie Krivda received the Cleveland Arts Prize award for lifetime achievement in music. The banner year ended with Krivda being awarded a CPAC (Community Partnership of Arts and Culture) Fellowship. In a career that spans over 50 years, Krivda has earned the respect of his peers and the accolades of critics. His very personal and distinctive improvisational style, along with his unique compositions, has been documented on over 30 recordings under his name and many others as a guest artist. In the last decade and into this one, he has set a most prolific pace with eleven releases since 2003 and more to come.

Ernie Krivda was born in Cleveland, began his music studies at age 6, and attended The Cleveland Institute of Music before going on the road. Since that time he has shared the stage with some of the great names in jazz. He was mentored by musicians such as Cannonball Adderley, played in Quincy Jones orchestra and performed with artists ranging from Ella Fitzgerald to Jackie Wilson. Krivda has made his home in Cleveland for most of his life but his music takes him across the United States, and into the concert halls of Europe and Japan. He also is a highly respected teacher and clinician who mentored many young jazz musicians working on the world jazz scene.