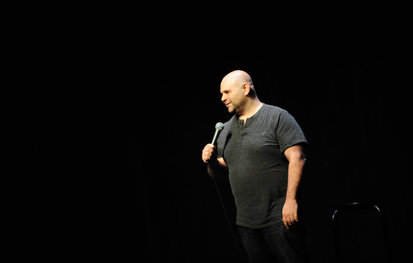 2010 was a rough year…I’d been a stand up comedian in Cleveland, Ohio for about 7 years but I really hit a wall.

Then my house burned down, business went under and my Mom died all within a few months of each other.

The last straw was when my wife had a scholarship to a local make-up school revoked because paid enrollment wasn’t high enough.

I convinced her it was a sign from the universe that we should move to NYC and become an entertainment power couple (cause that’s the kind of stuff I do). I would do stand up in the comedy capital of the world and she’d go to school in NYC and start her career as a make-up artist in TV and film.

Most people thought we were crazy leaving our hometown and everything we knew behind in our mid-thirties with 3 young kids. But we did. We went from a 5,000 square foot, 4 bedroom house in the burbs to a 900 square foot, 2 bedroom apartment in Park Slope, Brooklyn (and we pay more for the apartment).

It was a solid plan…

But what I didn’t count on was that my wife would graduate from school and have her career quickly sky rocket. Long story short, she’s doing make-up for the Today Show and The Tonight Show Starring Jimmy Fallon and I’m now Mr. Mom to our 3 daughters including a Jekyll & Hyde teen (Maria Rose AKA “Rosaria”), a smart ass middle child (Ava AKA “sloo”, “doopy”, “scam-a-day A”) and my youngest who has undiagnosed special needs (Eden AKA “Beans”, “Beantz”, “Bontz”, “Beebop Bitley”).

And I’m in one of the yuppiest neighborhoods in Brooklyn (just picture super Moms in yoga pants, pushing strollers and carrying small dogs). To say I’m in over my head (not to mention I don’t fit in) is an understatement. It also doesn’t help that I take nothing seriously and don’t want to do any of this crap. Help Me!

You can follow my day to day chaos through my blog.