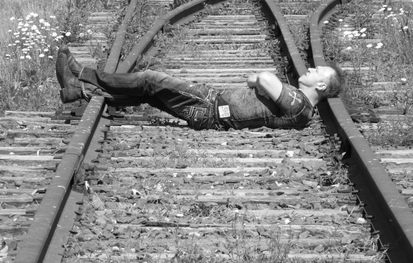 “Jeff Blanchard reminds me of a young Sam Kinison; He has the same crazy genius onstage.”
-Paul Mooney

A seasoned stand-up comedian with over 20 years of experience. He has Headlined clubs and colleges all over the country, including Jamaica. His show has been called dynamic, opinionated, and irascible. Jeff has been called “...one of the funniest men in Cleveland”, “an opinionated slob’, and “a pure entertainer”.

Jeff is co-founder of “Cabaret Dada Improvisational Theater and Something Dada Improvisational Comedy Co.” and trained with Del Close. Jeff’s newest comedy endeavor is “The Irregulars”.This high energy, laugh packed show has been a hit at The Cleveland Improv and is touring clubs nationally.

Jeff is a veteran of radio and television commercials and industrial films. He’s the voice for everything from supermarkets to every sports team in Cleveland. Jeff was most recently heard on the radio as the co-host of "The Jeff & Scott Show" on 98.5fm wncx. Jeff has appeared on television as a featured comic on “Saturday Night at The Funny Farm” on CBS, as Jimmy Barton in “The Babe Ruth Story” on ABC, as a regular on “Fox Unplugged” on Fox, as the host of the PBS specials “90 Degrees South” and “The Science of Cooking” and “The Quiz Bus” and was the executive producer for and performed on "The Something Dada Show" which aired on the UPN Network and WUAB locally. Jeff was also seen on Channel 19 WOIO as “The Cleveland Guy”, which received 2 Emmy Awards and a Telly Award, as well as, on-air weekly with Tailgate 19 on CBS.

Jeff has appeared in the feature films; “Striking Point” as John Burke, “My Summer Story” as The Bumpas’ , “Counterforce” and “Apres Film” as Jeff the Bartender. Jeff is also an accomplished writer and producer. His writing credits include commercials for the Ohio Lottery and live industrials for Progressive Insurance and PPG.

The difference with Jeff is his show always has something new. His improvisational training keeps his act stocked with the everyday fascinating, infuriating and down right annoying characters and situations you find in all walks of life. No matter what the make up of the audience; young, old, black or white, people respond every time Jeff is on stage. Whether they laugh, cheer or applaud, they like the way Jeff thinks.