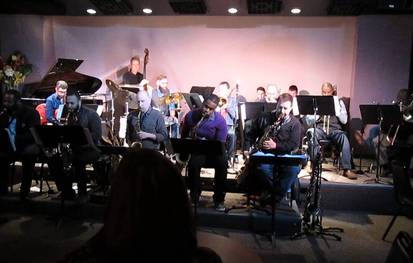 These guys rocked the BOP STOP earlier this year so we needed to have them return! Tonight they perform the band's own original compositions.

Sam Blakeslee is a trombonist/composer originally from Columbus, OH but now resides in Cleveland. Sam graduated from Youngstown State University in 2011 with a Bachelor’s Degree in Jazz Studies where he studied with Dr. Dave Morgan, Dr. Kent Englehardt, and Dr. Michael Crist. In 2013, Sam graduated with a Master’s Degree in Brass Performance from the University of Akron where he studied with Ed Zadrozny and Jack Schantz. Sam is currently the Instructor of Improvisation at Cleveland Institute of Music and Cuyahoga Community College.

Sam is very busy freelancing in the Northeast Ohio area where he has played with artists Sean Jones, Jiggs Whigham, Aretha Franklin, Dominic Farinacci, Bernard Purdie, Wessell “Warmdaddy” Anderson, and Derrick Gardner. He is a full-time member of the Heritage Jazz Orchestra. Sam also leads his own projects which includes his “Sam Blakeslee Large Group,” which is a 16-piece contemporary jazz ensemble which features all original composition of his and other members of the group. This past November, Sam took his sextet to New York City to perform at the prestigious Shape Shifter Lab. In more recent news, Sam has been accepted to the International Workshop for Jazz and Creative Music at the Banff Centre where he will get to study with Vjiay Iyer, Ambrose Akinmusire, Steve Lehman, and Warren Wolf, among others in May and June of 2014.