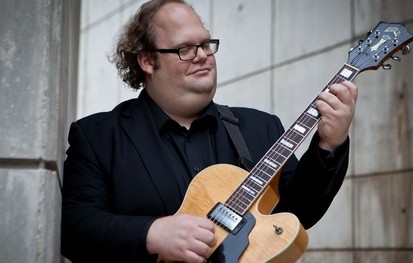 Playing music since the age of 6, the remarkable composer/guitarist Brad Myers decided to pursue transcendence through jazz expression at the age of 13. A highly eclectic musician, Brad has continued to perform in a wide variety of contexts, but his primary commitment to jazz is vividly demonstrated by the 2015 release of his album Prime Numbers. A culmination of his 20 years as a much sought after sideman and coleader of a variety of acclaimed ensembles that crossed the boundaries of multiple musical genres, Prime Numbers is Brad’s first album under his own name… and a stunning showcase for his brilliant talents as both composer and guitarist.

Born and raised in the Washington D.C. area, Brad first played piano, but switched to guitar at 10 under the early influence of The Beatles, Hendrix, Yes, Rush and the Allman Brothers, and maturing under the later inspiration of Jim Hall, the Bill Evans Trio, Keith Jarrett, Pat Metheny and John Scofield. He moved to Cincinnati in 1994 to study at the University of Cincinnati’s College-Conservatory of Music (CCM). Discovering the city’s deep musical history and its many outstanding musicians, Brad decided to forego the typical emigration to a larger coastal city and chose instead to contribute to his adopted home’s rich musical legacy.

After immersing himself in the local scene for four years, in 1998 Brad joined Ray’s Music Exchange, a popular Cincinnati based funk jazz outfit famed for long energetic improvisational grooves and inspired by a wide range of adventurous influences from Miles Davis and Frank Zappa to John Zorn and the Meters. For the next eight years, he contributed as guitarist, composer and producer; and when the group reunited in 2012, Brad produced their live DVD, A Live Rayunion.

Brad has continued to build his reputation and develop his skills with a diverse array of ensembles in the Cincinnati/Dayton area, and over all these years he has shared the stage with a variety of top names including John Scofield, Stanley Jordan, Victor Wooten, Bela Fleck, the Cincinnati Pops and many more. He was a featured guest soloist playing the "part" of Cal Collins in Nancy James and Carmen DeLeone’s A Salute to Rosemary Clooney; and he performed with Pernell Santurnini in a live broadcast from the renowned percussionist’s native Curaçao. Brad recently recorded with Fareed Haque in a big band recording of pieces from the guitar great’s Garaj Mahal, and then premiered the music live with him at Dizzy’s Club Coca-Cola at Lincoln Center in NYC.

Continuing to create on an eclectic canvas, Brad is heavily involved on the local scene – as a member of Steve Schmidt’s Organ Trio for the past five years; wielding a telecaster with the country/honky tonk group Jeremy Pinnell & the 55s; playing mandolin with Wild Carrot's Roots Band; performing progressive original jazz with The David McDonnell Group; acoustic vocal jazz and roots music with Jacklyn Chitwood in The Fraid Knots; and funky jazz with the local core of Ray's Music Exchange.

Education is also a key component of Brad’s vision, and has been ever since he began teaching while at CCM. For years he’s maintained a teaching studio that balances his performance schedule with his proclivity for passing on his knowledge.In 2013, Brad returned to CCM to pursue his formal studies and in 2015 received his Master’s Degree in Jazz Studies.

Catalyzing all of his influences with his extensive musical experience, Brad Myers is set to make his own powerful mark on the glorious legacy of jazz.