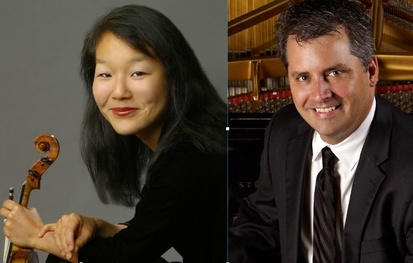 On Sunday, December 13, 2015 at 11:00am, Mari Sato (second violinist of the Cavani String Quartet), and Robert Cassidy (pianist of the Almeda Trio) join forces to perform the complete Sonatas for Piano and Violin by Johannes Brahms. Don't miss this special event!"

Violinist Mari Sato enjoys an active career in the performance, recording, and teaching of chamber music as the second violinist of the Cavani String Quartet, winner of the 1989 Naumburg Chamber Music Award, the Cleveland Quartet Competition and the 1998 ASCAP-Award for Adventurous Programming of Contemporary Music. As a member of the Cavani String Quartet, Mari has performed numerous concerts in the United States and abroad, including appearances at the Corcoran Gallery and Kennedy Center in Washington, D.C., Festival L’Epau in France, and engagements at Carnegie Hall and Lincoln Center in New York. Collaborations with distinguished artists include Itzhak Perlman, Anton Nel, Joel Krosnick, Martha Strongin-Katz, Paul Katz, Robert Mann and the Weilerstein Trio. Ms. Sato has recorded for the Azica, Albany, Gasparo and New World labels. She has given master classes and lecture-demonstrations at universities, colleges, public and private schools in communities around the country. Mari Sato received her Bachelor of Music Degree from the Cleveland Institute of Music and pursued graduate studies at the University of Michigan. Her major mentors include Peter Salaff, David Cerone, and Paul Kantor. Mari was appointed to the conservatory faculty at the Cleveland Institute of Music in 1995.

Pianist, Robert Cassidy, has received critical acclaim for his performances and recordings of both solo piano repertoire and chamber music. He received his Bachelors and Masters degrees in Piano Performance from the Manhattan School of Music, where he studied with Solomon Mikowsky, Constance Keene, and Marc Silverman. Subsequent studies followed with the legendary pianist Menahem Pressler at Indiana University. Dr. Cassidy holds a Doctor of Arts degree in Piano Chamber Music and Accompanying/ Piano Performance from Ball State University, where he studied with Robert Palmer.

Dr. Cassidy often appears as a soloist and chamber musician. He has also been presented on radio stations WFMT in Chicago (Dame Myra Hess Series), WRUW, WCLV and WCPN in Cleveland, WKSU in Kent, Ohio, and WNYC in New York (Around New York). Dr. Cassidy has premiered solo piano works by the American composers David Noon and Keith Fitch. He is the pianist in the Cleveland-based, Almeda Trio (www.almedatrio.com) and regularly performs chamber music with members of The Cleveland Orchestra.

A extremely active and highly sought-after teacher and chamber music coach, Dr. Cassidy is in demand for master classes, workshops and lectures, private teaching, and adjudication. He maintains a studio at the Music Academy of the West in Santa Barbara, CA.