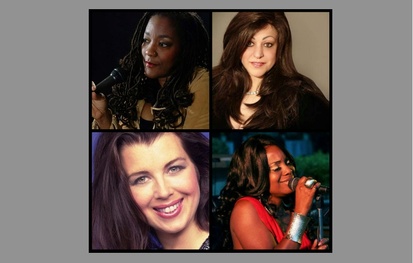 Your Jazz At The Bop Series host is singer songwriter Barbara Barrett. Barbara is a multi-genre vocalist with an impressive vocal range. Her interpretation, song choices, and original music, reflect her strong background in European classical, gospel, jazz, blues, reggae, R&B, and soul. Barbara has been well received on local stages including Nighttown Cleveland, and The Rock and Roll Hall of Fame. National appearances include Las Vegas, and New York City’s Manhattan and Harlem where she was honored to share the stage with Art Blakey’s saxophone player Lou Donaldson. Barbara has produced two CDs. “Dawning”, which is her first collection of originals, has received national and international airtime. “Dawning” will be available at the show! Barbara views singing as a form of healing, equally as powerful as her daytime nursing practice. Find out more at www.barbaraandco.com

Whether its jazz, pop, or blues, Laura Varcho is sure to bring charisma and interpretive brilliance. In addition to solo performance, Laura is a vocal coach, and also presents music lectures. You also may catch her in a TV commercial or two! Her performances have included the Tri C, Youngstown, and Toledo Jazz Festivals, and as featured artist at venues such as nationally acclaimed Nighttown Cleveland, and Cain Park. Laura has opened for Boney James, Kim Waters, and Kenny Rankin. Her CD entitled “Desire” will be available for purchase and contains Laura’s renditions of some of your favorite classic jazz pieces. For more, go to www.lauravarcho.com

This former traffic reporter and disc jockey lived in Los Angeles for eleven years. Born and raised in Cleveland, she sang in a variety of prestigious LA venues, including Chaya of Beverly Hills and The Langham Huntington (formerly The Ritz Carlton). In addition to being a vocalist and featured soloist with Lafayette Carthon and Faith, Maria has opened for trumpeter/songwriter Chuck Mangione, and continues to write songs. She has produced five CDs, some of which can be heard overseas, and will be available for purchase at the show. Soon you can look for the release of her second single, “What If?” Check her out at www.mariajacobs.com

One of Nancy Redd Shelton’s most awesome influences has been her sax-playing dad. She will be coming to the stage not only with sultry classic jazz vocals, but with her flute as well! Nancy has opened for Grammy Award winning Solomon Burke, and The Four Tops. Her numerous venues around Cleveland include The Cleveland Museum of Art, Wade Oval, and The Cleveland Public Library’s Women In Jazz Series. When not singing, playing her flute, or working by day in the field of sociology, you might catch her in an acting role! Get a full picture of who she is by going to www.nancyreddjazz.com