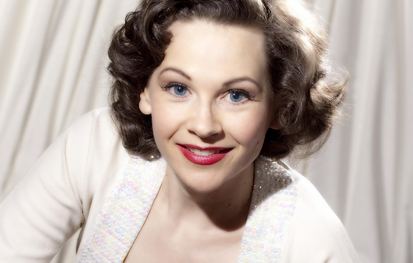 In this cabaret-style concert, Joan Ellison shines a spotlight on the musical and personal life of Judy Garland from her star turns in Meet Me in St. Louis and Easter Parade, to the termination of her contract at MGM, to her dramatic comeback as a concert artist and triumphant return to the big screen in A Star Is Born. Between "The Boy Next Door" in 1944 and "The Man That Got Away" in 1954, the hit tunes performed in authentic arrangements based on the originals include "I Love a Piano," "Johnny One-Note," "Get Happy," "Last Night When We Were Young," "The Trolley Song," and "Over the Rainbow." www.joanellison.com

Joan Ellison has been praised for her "vocal prowess....[and] organic grasp of the classic songs" by Michael Feinstein, and “possess[ing] a crystalline voice that never stops” (Donald Rosenberg, The Plain Dealer). She has been performing Garland tunes with symphony orchestras in All Happiness, Judy Garland and in theaters with Love Finds Judy Garland for several years, but the February ’16 TheatreZone (Naples, Florida) production of The Boy From Oz marks the first time she has ever actually played Judy. She made her Cleveland Pops Orchestra debut at Severance Hall in 2005 and has since sung more than 30 concerts with the Pops, Erie Philharmonic, Wheaton and Lakeside Symphonies, and others in repertoire ranging from The King & I to Wicked. Her critically-acclaimed album, “Retrophonic Gershwin” (2015), mixed by Grammy-winning engineer Robert Friedrich, is available on iTunes. In addition to touring with Love Finds....and Gershwin On the Air, regional theatre credits include Julie in Carousel, Nellie in South Pacific, Lizzie in 110 in the Shade, Eliza in My Fair Lady (in-concert), and Claudia in Nine. An Oberlin Conservatory graduate, she teaches popular voice at the Cleveland Institute of Music and the CWRU/Cleveland Play House MFA Acting Program. www.joanellison.com

Pianist Jason Aquila holds a Master of Music degree in Collaborative Piano and Chamber Music from the Cleveland Institute of Music. He was recently appointed Opera Coach at Baldwin Wallace Conservatory, where he also teaches, coaches chamber music, and is on the accompanying staff. He has served as collaborative keyboardist for the Baroque Performance Institute at Oberlin Conservatory, and was the assistant music director for Baldwin Wallace's production of La Boheme with conductor Constantine Kitsopoulos. For ten years he was Coordinator of Accompanying at Western Illinois University and has also presented concerts throughout the midwest region and in Florida.