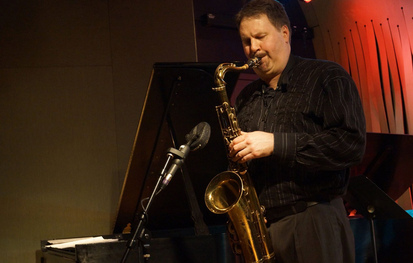 Saxophonist/composer/arranger Russ Nolan has been documenting his explorations of Latin rhythms and modern jazz harmony on record since the release of his 2004 debut, Two Colors. He has worked with special guests like percussionist Victor Rendon and pianists Kenny Werner and Manuel Valera while deepening ties with players who eventually coalesced into his working group.

For his sixth CD, Nolan set himself up for a new challenge by recording the session live in performance. The inspired results may be heard on Sanctuary from the Ordinary: Live at Firehouse 12, which was released on the saxophonist's Rhinoceruss Music label on February 12.

The Illinois native (b. 1968) started out on clarinet at age 10 while attending school in Gurnee, but sports took precedence and Nolan envisioned becoming a professional athlete. Albums by Weather Report, Herbie Hancock, and the Brecker Brothers turned his head around, however, and he eventually entered the esteemed jazz program at North Texas State (now the University of North Texas).

Nolan moved to Chicago after graduation and studied with local saxophonist Rich Corpolongoand with visiting New Yorkers Dave Liebman, Chris Potter, and Kenny Werner. Nolan also studied with Dave Bloom, founder of the Bloom School of Jazz, whose words of wisdom have reverberated through the years for him. "I learned a lot about appealing to non-musicians from Dave, to the people who were paying to see you," he says. "One of his messages to musicians was to stop babbling, stop playing all those notes. People were drawn to melody and rhythm, not to how fast or complicated you could play."

Since relocating to New York City in 2000 (encouraged by the visiting pros he'd taken lessons from in Chicago), Nolan has put the pieces of his career as a saxophonist, writer, arranger, and clinician together. He's emerged as a prolific recording artist. And he's connected with the city's burgeoning pan-American scene, for the last three years leading a salsa band that performs for dancers.

For his performance at BOP STOP Russ will be joined by the Theron Brown Trio which features: