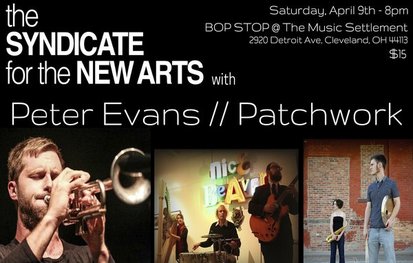 The Syndicate for the New Arts is ecstatic to return to the Bop Stop at The Music Settlement for an exciting evening of new and improvised music. The Syndicate is performing alongside saxophone and drum duo Patchwork and trumpeter Peter Evans for a triple feature concert. Including individual performances and group collaborations, this concert offers a varied program of incredible musicians all coming together in Cleveland's most forward thinking venue.

Peter Evans is an American trumpet player based in New York, who specializes in improvisation and avant-garde music. Evans has been a member of the New York City musical community since 2003, when he moved to the city after graduating from The Oberlin Conservatory of Music. He is a member of the International Contemporary Ensemble (ICE) and Wet Ink. He has been commissioned by the ICE, Yarn/Wire, the Donaueschingen Musiktage Festival, the Jerome Foundation's Emerging Artist Program and was a 2014 Artist-in-Residence at Issue Project Room in Brooklyn, NY. He is a member of several fully cooperative groups, such as Pulverize the Sound, Rocket Science, Premature Burial. Evans has collaborated with a broad range of figures in modern music: Weasel Walter, Evan Parker, Matana Roberts, Tyshawn Sorey, John Zorn, Mary Halvorson, Peter Brotzmann, Aaron Burnett, Okkyung Lee, Nate Wooley, and has premiered compositions by Brian Ferneyhough, George Lewis, Eric Wubbels, Anthony Braxton and Barry Guy. He has presented and/or performed his music at many major international festivals and has toured his own groups extensively in Europe, Canada and the United States.

Mutually interested in exploring a wide range of contemporary genres, Noa Even and Stephen Klunk formed Patchwork, a saxophone and drum set duo that collaborates with composers to build an eclectic body of new music. Based in Cleveland, Patchwork has appeared in St. Louis, Cincinnati, Pittsburgh, Baltimore, New York City, at the 2014 North American Saxophone Alliance Biennial Conference and at Bowling Green State University's annual New Music Festival in 2013. In 2015, Noa and Stephen performed student compositions for reading sessions at the College-Conservatory of Music at the University of Cincinnati and Ball State University. Patchwork recently headed a consortium commissioning project for a piece by composer Eric Wubbels. Entitled Axamer Folio, the work will be premiered this season.

The Syndicate is a performance ensemble specializing in music created in the Rust Belt, actively working to grow a contemporary music community in North East Ohio. Our team works closely with local artists while also bringing new artists to Cleveland for performances, workshops, and other collaborations.