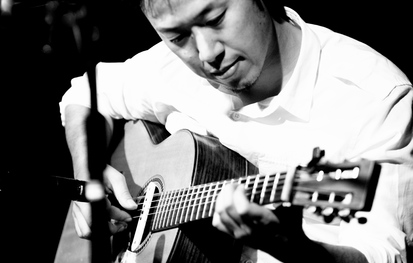 Hiroya Tsukamoto performs solo guitar that takes us on an innovative, impressionistic journey filled with earthy, organic soundscapes that impart a mood of peace and tranquility.

Hiroya Tsukamoto is a guitarist and composer originally from Kyoto, Japan. He began playing banjo when he was thirteen years old. In 2000, he received a scholarship to Berklee College of Music and came to the US. Since then, he has been performing internationally including several appearances with his group at Blue Note in New York and released six albums as a leader. He also performed and appeared on major international television stations such as NHK (Japanese National Television) and EBS in Korea. Hiroya has developed unique acoustic music which is sometimes described as "cinematic acoustic music".