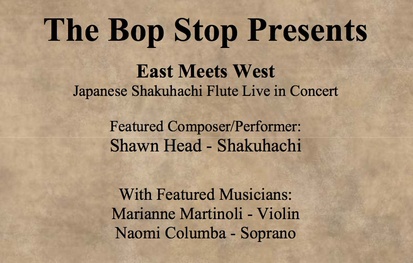 We welcome you to join us for an evening of Japanese Shakuhachi Flute music. The evening will feature:

Shawn's music is primarily in the Chamber and Solo repertoire and are influenced by Japanese traditional music. Shawn is of the mind that in order to gain a fuller understanding of another culture's aesthetic traditions and histories, you must be able to understand the language of the people who live in that culture. He believes that his fluency in Japanese helps him to respectfully employ elements of Japanese music, such as Hogaku (邦楽), Zen Music (禅音楽),and Gagaku (雅楽). Musicians refer to Shawn's music as "A deeply felt Japanese sentiment structured with a virtuosic western filigree." - Mikhail Vayman. Performers have said, "When playing Shawn's music, I feel that I need to open my musical perspective to colors, techniques, and tonalities I don't get to use often while playing western repertoire." -Leah Stevens. Shawn has recently been commissioned to compose a work for Shakuhachi (尺八) and String Quartet with the goal of fusing western classicism and Japanese aesthetics and sensibility. Shawn's music has been performed by members of the Milwaukee Symphony Orchestra, Cleveland Orchestra, Cleveland Institute of Music faculty and staff, as well as Ball State University Faculty. Most recently,Mary Kay Fink of the Cleveland Orchestra commissioned Shawn to compose a work for PAND (performers and artist for nuclear disarmament) for the 70th anniversary of the Nagasaki and Hiroshima bombings in Japan."Thank you for writing the perfect piece for this program." - Mary Kay Fink.

Since the beginning of 2015 Shawn has been appearing as a guest lecturer for Japanese music, culture, aesthetic, and religion, along with western composition, and improvisation. He has presented at Case Western Reserve University,the Cleveland Institute of Music, OTAJ (Ohio Teacher's Association of Japanese), Cleveland One World Festival, Ball State University, and was appointed as faculty at the Benefic Chamber Music Camp by artistic director Anna Vayman. Under the guidance of "Daishihan" (Grand Master), Michael Chikuzen (竹禅) Gould, Shawn is studying Shakuhachi with the goal in mind to earn the "Shihan" title, master of Shakuhachi. Handed down by monks for hundred of years, Shawn is continuing the tradition of Shakuhachi and reinvigorates its life by continuously writing new works focusing on the unique capabilities of the instrument and placing it in western mediums. In addition to Shakuhachi,Shawn is studying other instruments of the flute variety: Nohkan (能管), Ryuteki (竜笛), Shinobue (篠笛), and Hichiriki (篳篥).