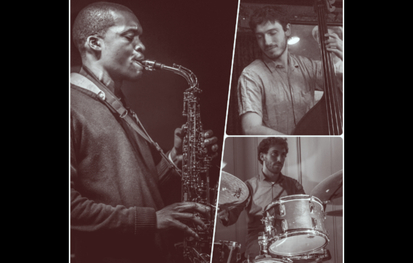 The trio known as Possibilities was formed at Oberlin Conservatory of Music in 2009. Known for their collective ability to explore and arrive at intimate moments of musical creativity and interpretation, saxophonist Tim Bennett, bassist Dan Stein, and drummer Peter Manheim uniquely push beyond the boundaries of the traditional jazz trio. Their effortless approach to group improvisation through original compositions and unique re-workings of jazz and pop standards has been essential in the development of their sound. They share a unique symbiosis, and enjoy the process of discovering, and sharing with the listener, something new in the music every time they perform.

Tim Bennett is a saxophonist, composer, and educator currently based in Chicago, Illinois. He is a graduate of the highly esteemed Masters of Music Teaching program at Oberlin Conservatory as well as an alum of Oberlin’s double-degree bachelor program, where he majored in Jazz Saxophone Performance and Religion. Originally from Chicago, Tim was introduced to the saxophone in elementary school. With the help of teachers like Jacques Slaiher, Ari Brown, Pharez Whitted, Jarrard Harris, and Ron Carter, Tim eventually decided to pursue a career in music. By the end of high school, he was enrolled in music programs at the Thelonious Monk Institute at Gallery 37, Merit School of Music, the Jazz Institute of Chicago, and After School Matters. Amongst Tim’s most noticeable mentors are saxophonist Gary Bartz, saxophonist James Kalyn, Oberlin Jazz Studies founder and former director Wendell Logan, former Oberlin English Professor John Hobbs, and drummer Paul Samuels. Throughout his musical journey, Tim has been privileged to be the recipient of the Questbridge Scholarship, the Wendell Logan Conservatory Jazz Studies Scholarship, and the Presser Music Award. Tim currently teaches middle school band on the southwest side of Chicago while maintaing an active role as a composer and performer in the Chicago-land area.

Daniel Stein is a versatile and exciting young bassist and native New Yorker. He recently completed his masters at The Juilliard School, where he studied with Ray Drummond and Ron Carter. He is an honors graduate of the Oberlin Conservatory of Music, where he studied with Peter Dominguez and was a member of the Oberlin Jazz Septet, a small jazz ensemble comprised of outstanding student performers nominated by the jazz faculty at Oberlin. At Oberlin, Daniel had the opportunity to study and perform with Gary Bartz, Billy Hart, Robin Eubanks Marcus Belgrave, Dan Wall, and others. While living in Cleveland, Daniel performed with the Cleveland Orchestra, Jamey Haddad, Alicia Weilerstein, Dominick Farinacci, and others. Daniel is now an active performer in New York, with recent appearances at Jazz at Lincoln Center, Smalls, Dizzy's Club, Mercury Lounge and many other venues, including appearances with Billy Hart, Kenny Rampton, Donny McCaslin, Sherman Irby, Paquito D'Rivera, and others. Dan regularly performs and composes in a variety of styles besides jazz, and composed and performed the film score for the short film, Serenity. This past summer he had the honor of performing on the Queen Mary 2's 200th crossing, at the Bumbershoot festival in Seattle, and at the Costa Rica jazz festival. He received a Juilliard Alumni Scholarship, the Calhoun School Music Award, a Conservatory Dean’s Award, the Margaret V.H. Jones Conservatory Scholarship, and the Elizabeth Davies Scholarship at Oberlin, and is a member of Pi Kappa Lambda, a national honor society for excellence in music and academic achievement.

Peter Manheim is a drummer and percussionist from Evanston, Illinois. In 2012, he completed his bachelors degree in music at Oberlin Conservatory. While at school, he was fortunate to study with drumming masters Billy Hart and Jamey Haddad, both of whom became extremely important mentors to him. Upon completing school, Peter moved to Brazil, where he spent six months traveling, performing, and studying Brazilian drums and percussion. Peter is currently based in Chicago where he performs regularly in a variety of music styles. Peter tours nationally and internationally with bands including The New Samuel Mösching Trio, CECIL, and Maggie Brown.

Junior Ranger is a collaborative jazz quartet based in Oberlin, OH. They have worked to explore non-traditional orchestration, firm compositional structures, and free improvisation. Performing both nationally and internationally, their individual members have won awards across the United States. In 2014 Junior Ranger was awarded a grant through Oberlin Conservatory to study Dutch improvisation and develop new material, and they spent January of 2015 in residency in Amsterdam, rehearsing and performing new music. This resulting music was recorded at Clonick Recording Studio on May 27th & 28th 2015, and was released as their debut album Monster Masks on October 13th, 2015.