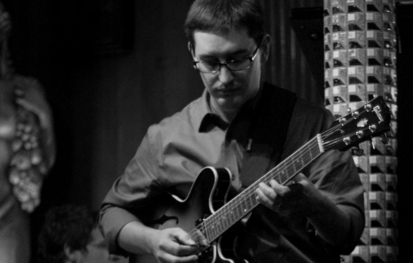 By embracing the influence of his heroes from the jazz tradition and retaining his own musical personality, guitarist Daniel Bruce has developed a unique and impressive musical voice. He is active as a performer, recording artist, composer and educator. He moved to Chicago in 2007, after finishing his master’s degree in jazz studies at the University of North Texas. He was quickly performing at a number of the city’s finest jazz venues including The Green Mill, The Jazz Showcase, and Harris Theatre in Millennium Park.

As a jazz performer and recording artist, Daniel Bruce has had the opportunity to work with a number of eminent musicians including Ali Jackson, Dan Wall, Lynn Seaton, The Cleveland Jazz Orchestra, Marvin Stamm, and Dave Restivo. He has been a featured composer in Fingerstyle Guitar Magazine, and remains a regular contributor. Daniel released A Single Thread, his first album as a leader, in 2008 on NohJoh records.

Daniel has held faculty positions at Muskingum College, Cuyahoga Community College, Harold Washington College, St. Xavier University, and Interlochen Center for the Arts. Bruce was awarded a Teaching Fellowship upon entrance to UNT where he taught applied jazz guitar lessons, directed two guitar ensembles and a student big band while pursuing his own studies at the University.