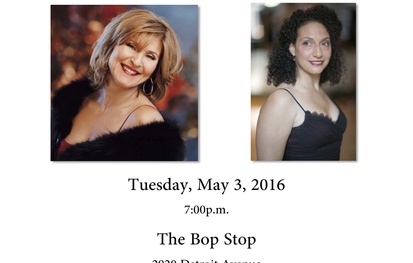 Please join us for a very special evening in which the Tri-C Jazz Studies Vocal Ensemble, an elite ensemble in which students perform both a cappella and accompanied vocal arrangements that embrace the jazz, gospel and R&B tradition, perform alongside Janis Siegel and Kim Nazarian. This band is directed by Reginald Bowens and the backing band is led by Phil Jones.

Over the past three and a half decades, the voice of Janis Siegel -- a nine-time Grammy winner and a seventeen-time Grammy nominee -- has been an undeniable force in The Manhattan Transfer's diverse musical catalog. Alongside her career as a member of this 36-year musical institution, Siegel has also sustained a solo career that has spawned more than a half dozen finely-crafted solo albums and numerous collaborative projects, amassed a large international fan base and garnered consistently high critical praise.

Kim Nazarian is the soprano and one of the founding members of the New York Voices, the only vocal group in recent memory to win two Grammys for live concert recordings (one of Brazilian music with Paquito D’Rivera, the other for Big Band Jazz with the Count Basie Orchestra). She has recorded, performed and toured the world with this outstanding vocal ensemble for the past twenty years. She has also launched an incredible solo career.

This event is free but donations are gratefully accepted!