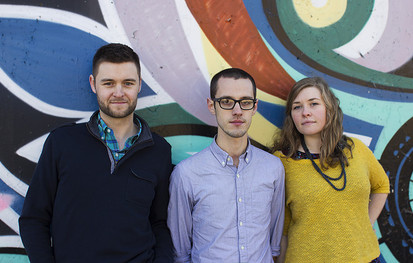 The three musicians have an affinity for melody and nuance, but the fabled Chicago tradition of improvised music has had its affect on the band. “Chicago’s legacy of creative improvisers has had a huge impact on how we approach music,” says saxophonist Dustin Laurenzi, “it challenges us to be reckless and take risks every time we play.”

Their band name is inspired by the phenomenon of Cryptophasia, or ‘twin speak,’ an autonomous language some twins develop with each other. “The idea of developing a connected and deeply personal language resonated with us,” explains drummer Andrew Green, “Dustin, Katie, and I share a musical version of ‘twin talk.’”

Before emerging as Twin Talk, they were performing as Laurenzi/Ernst/Green, releasing their first album and performing at the 2014 Chicago Jazz Festival under that name. The switch to Twin Talk was motivated by the desire to achieve a unified band identity. “We didn’t want to be a jazz law-firm anymore,” says bassist/vocalist Katie Ernst, “plus, we rehearse more like a rock band in how we workshop music, so let’s have a rock band name that reflects who we are.”

The music on the album (ears&eyes Records 2016) ranges from intricate, multi-sectional songs like album opener “Colorwheel” and labyrinthine “Teddy” to the downright groovy “J.J.” and “Eleven.” The band demonstrates patient restraint in the unfolding of their freer repertoire; meditating on the melody of “Martha” and reveling in the building tension of “Like Bells.” Bassist Ernst sings on three of the 11 tracks: two with lyrics written by Ernst (“Hush, Hush” and “Living Room”), and one with wordless vocals “One Foot in Front of the Other,” written by Laurenzi. Similar to their first release, Sightline (2013), Ernst’s voice is used as an alternative texture and not as the focal point of the album. The dark tone of Laurenzi’s saxophone blends with Ernst’s voice to create rich harmonies within the chord-less trio setting.