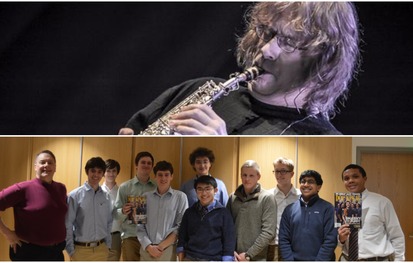 Sam Morrison is a soprano saxophone and alto flute player/composer whose credits include being a member of the Miles Davis Band. His performance with Miles at the 1975 Newport Jazz Festival (held that year at Avery Fisher Hall), was very favorably reviewed in the NY Times; part of that concert's recording was recently released in the Miles Davis Bootleg Series, Volume 4; 1955-1975 Newport Jazz Festival. Other bootleg recordings of concert and club performances of the band including Sam are sold by many collectors on the Internet. Morrison is also featured on the Columbia boxed set, The Complete On The Corner Sessions.

Morrison has played and recorded with many legendary jazz, rock and blues greats such as Gil Evans, Al Foster, Buster Williams, Woody Shaw, Billy Hart, T-Bone Walker, and Michael Shrieve, Michael Brecker, Masabumi Kikuchi, and Ryo Kawasaki. He has toured Europe playing such major jazz festivals as Vienne, Nice, Paris, and Stockholm. Sam has been a member of "The Children on the Corner", the Electric Miles reunion band featuring bass legend Michael Henderson and jazz tabla pioneer Badal Roy. Sam studied music at Columbia University in NYC where he hung out regularly at jazz clubs like Slugs and the Village Vanguard, as well as at Fillmore East where he heard all the legendary rock bands of the day.

His first solo recording, "Dune", from that period on Inner City/East Wind Records won critical acclaim in jazz circles as a ground-breaking fusion album. His next album, "Natural Layers" on Chiaroscuro Records, utilized the talents of Grammy winning drummer/producer Narada Michael Walden and incorporated world rhythms in a tapestry of funk, fusion and jazz.

All of these influences can be heard in his current release, "Howl Revisited" on Brown Bag Records. The title track is an authorized version of the classic legendary Allen Ginsberg poem that virtually launched the mid-20th century-through-present-day literary and artistic sensibilities. Treated here in a techno jazz style that hopefully Ginsberg would approve, the vocal is performed by Morrison.

Other pieces on “Howl Revisted” include:

"Neema" - co-written by Sam and the gifted South African singer Mapumba Cilombo; his spectacular voice conveys the beauty of his lyrics and melody. T Xiques plays electric bass on that cut, as well as guitar and bass on “Hangin With Sherie,” demonstrating Xiques' remarkable multi-instrumentalist chops.

"Juxtaposition" is just Morrison on soprano sax and alto flute and a Macintosh computer doing synth, drums, and orchestration.

His previous CD, Dark Matter, received great reviews in the US and Europe, and is also available through Brown Bag Records.

University School in Hunting Valley, Ohio, offers three jazz groups that explore the full range of jazz styles found throughout the 20thcentury, from the 1920’s New Orleans Era to avant-garde and funk. The top jazz ensemble (the "1:00 Jazz Ensemble", named after the tradition of naming groups set by the University of North Texas) has always been configured as a large ensemble; i.e. big band. The second group (the "2:00 Jazz Ensemble") was created in 2004 due to increasing numbers of interested players and will form into whatever the numbers of successful auditionees present itself to be. Additionally, there is a third group, the U.S. Jazz Combo, comprised of the strongest improvisers.

The U.S. jazz groups have played at numerous venues including the Rock and Roll Hall of Fame, Nighttown, Tower City, Renaissance Hotel, The Hermit Club, Landerhaven and the Cleveland Grand Prix parade. U.S. jazz ensembles have performed in conjunction with the Tri-C Jazz Festival. And, back when there was only one ensemble, that group won Third Place in the Down Beat (magazine) Jazz Festival in Orlando in the mid-90’s, receiving recognition in an issue of the magazine. Additionally, they have featured former Miles Davis saxophonist Sam Morrison as guest soloist, and performed in New Orleans’ famous Preservation Hall. They have been given clinics by the likes of Bobby Watson, Keith Hall and Joe Lovano

Directed by David Kay, a former instructor in the world-renowned Jazz Studies Department at Indiana University, as well as a current (29 years running) faculty member in the jazz program at the Interlochen Arts Camp, and a professional musician besides, US jazz groups have graduated many US students active musically during college and afterward. Some have attended Interlochen and the Jamey Aebersold camps in the summers; others have majored in music at schools such as the University of Cincinnati College-Conservatory of Music, University of Southern California, and the Ohio State University.

First set starts at 7pm and second set will begin at 8:30pm. Prices are as follows: