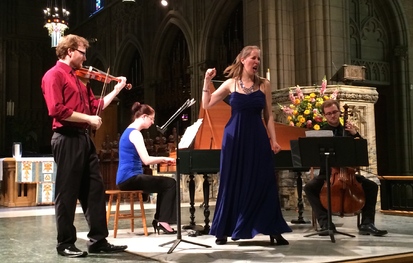 Burning River Baroque presents: On the Brink of Insanity, Portrayals of Women as Mad, Crazy, and Unhinged.

Dramatic musical works often contain scenes of overwhelming emotion in which male characters are frequently portrayed as being consumed by power. When women are overcome with emotion, however, male composers often attribute madness or craziness to them. Burning River Baroque will present a selection of works by George Frideric Handel, John Eccles, and Henry Purcell where women’s passions and emotional expressions render them as unhinged in the eyes of their creators. In a new move for the ensemble, the program will feature an original work by Malina Rauschenfels using texts from the Salem witch trial of Bridget Bishop. This fusion of new and old works will shed light on how the ways we describe those who are different from us can have very real and long-lasting effects on the community at large.

Founded in Cleveland in 2012, Burning River Baroque takes its name from the famous incident in which the badly polluted Cuyahoga River caught on fire. This name not only connotes the fiery passion which the ensemble brings to its performances, but also reflects the practice of tying history and social change to music and current issues in a way that feels fresh and relevant to contemporary audiences. While Baroque performance practice informs the group's presentation of historical works, they have evolved its presentation to encourage a participatory concert atmosphere, breaking the fourth wall and involving audiences in the drama that is occurring onstage.

Burning River Baroque seeks to throw open the doors of the concert hall to audience members who may never have considered that classical music had something to offer them or could reflect their life experience and concerns. Classical music can be perceived as elitist or stuffy; Burning River Baroque shows that it can be the opposite. It is their mission to create concerts that educate and appeal to all types of audiences. Burning River Baroque has performed in NYC, Boston, Berkeley, California, Canada, and extensively in Ohio. The Boston Musical Intelligencer described them as a group that “...left an indelible imprint on my psyche.” Co-directors Malina Rauschenfels and Paula Maust manage the group and hire outside artists as necessary for a diverse array of programs each concert season.