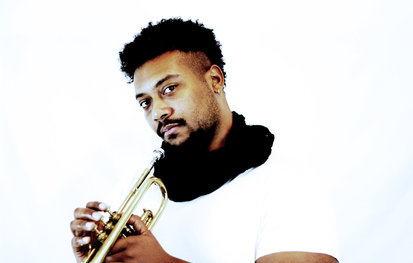 Wave Magnetik is the huge electronic music duo lead by producer and trumpeter Donald Malloy. In the band, Donald plays trumpet and DJs with live drums. Based out of New York City Malloy has worked with Grammy Award winners and nominees such as, Tye Tribbet, Nicholas Payton, Roy Hargrove, Wallace Roney, and Renee Neufville (Zhane).

Wave Magnetik has been touring since 2013 under the name Clear Water and in November of 2015 changed its name to Wave Magnetik to better capture the essence of the sublime experience of their music. They have performed at venues such as The Detroit Electronic Music Festival, The Youngstown Jazz Festival, and The Tri-C Jazz Festival. They have also been featured in such publications as "Unheard Voices Magazine",MWR Blog, and Jazz Times where Wave Magnetik's music was referred to as "GENIUS." In 2015 they released their 3rd ep,"Electricity" which was ranked #5 on the CMJ charts. Now in 2016 Wave Magnetik is releasing their 4th EP “Abstract Compulsion”. This album has 6 tracks and features an array of wonderful vocalists such as Nicholas Ryan Gant, Sandra Small, and Deshai Williams. “Abstract Compulsion” shows Wave Magnetiks diverse production abilities by showcasing a mix of house, drum and bass, dubstep, and rock.

Wave Magnetik's music is a seamless blend of Electronic Dance Music and Jazz. To put it simply, it is Skrillex and Zedd meets Miles Davis. With this new sound they are pushing the envelope in the music world. The union of this electronic duo is greatly defining the sound of Electronic Music.