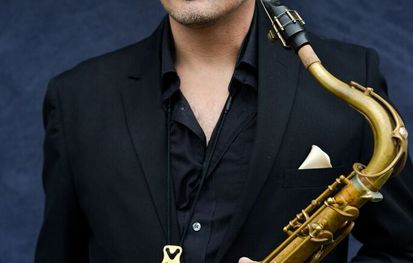 Tom performs at jazz clubs and other venues throughout NYC including, Smalls Jazz Club, The 55 Bar, Birdland, The Sidedoor, Chris’ Jazz Cafe, Arts Council Of Princeton, WhyNot Jazz Room, Cornelia Street Cafe, The Garage, Bar Next Door, and more. He regularly performs at venues up and down the east coast, and tours throughout the United States.

In addition to having his compositions and arrangements played by vocalists and musicians throughout New York and Philadelphia, Tom has had his works performed by individual dancers from the Martha Graham Dance Company at various choreographer showcase venues.

He is musical director, and composer for the multi-media dance company Big Sky Project, founded by his wife Carrie Ellmore-Tallitsch. Big Skyʼs mission is: “Grassroots Community Fellowship. Gathering community and all of the resources and skills available for barter, thus creating commerce, self-sufficiency, and art with in a village. One project and location at a time, Big Skyʼs mission is to initiate the healing of the environment in which we all live, through imaginative, innovative, experimental, artistic, and inspired philosophy.”

Tom owns a highly recommended music tutoring business in Princeton, NJ and is a popular jazz educator and clinician. He works as a piano teacher to students on the autism spectrum at The Princeton Child Development Institute and teaches piano and woodwinds at The Princeton Junior School.

He was the founding director of The Central NJ Homeschool Bands and was Artist Faculty at Mercer County Community College. He has taught at The Westminster Conservatory, Philadelphia Clef Club, Creative Music Studios, The Groove Academy, and many more. He is a gifted music educator who has given lectures and clinics at many top high schools including The Lawrenceville School and The Pennington School. He has had students continue on to pursue professional careers at conservatories throughout the country.

He hosts his own jazz radio show titled “The Modern Jazz Radio Show” on the Mercer County Jazz Station WWFM Jazzon2 89.1 HD2. The show features Tom’s own personal jazz picks and commentary, and airs every Thursday evening from 8:00 to 10:00 pm. Weekly playlists are sent to all artists, record companies, and publicists.

Tom Currently resides in Jersey City, NJ. He is originally from Cleveland, Ohio where he began his musical training on the piano, clarinet and saxophone. He as also lived in Cincinnati, Philadelphia, and Hamilton, NJ. He holds a Bachelors of Music in Jazz Studies from the University of Cincinnati College Conservatory of Music (CCM), and has participated in clinics with Joe Henderson and Chris Potter. He has studied with saxophonists Rick VanMatre, Ernie Krivda, Mike Lee, Ben Schachter, Seamus Blake, and pianist Phil DeGreg.