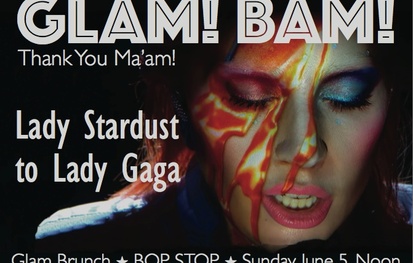 BOP STOP presents a Glam Brunch that traces music and culture from turn-of-the-Century decadence to the underground art scene of proto-punk Akron & Detroit to London, New York and the dizzying heights of today’s pop charts.

The Glam firmament blazes a glittering trail from Art Nouveau through the Roaring Twenties to drag, burlesque & British Music Hall, from Noel Coward through Warhol’s Pop Art and the Velvet Underground’s transgressive Exploding Plastic Inevitable, from John Cage and Little Richard, to Iggy Pop, Suzi Quatro, Rocky Horror and DEVO, from Jacques Brel and Vince Taylor to Bowie’s Ziggy Stardust and Mott The Hoople to The Clash and the Runaways to Malcolm McLaren’s New York Dolls and the Sex Pistols to The Cure and hair metal, from Queen, Blondie and Parliament/Funkadelic to nine inch nails to techno and ABBA, from Arcade Fire and Green Day to Sia & Lorde to The Struts & Lady Gaga. Prince? Oh, yes!

Doors open and food service begins at 11am while the show begins at noon. $10 admission does not include food or drinks however a full brunch menu will be available.