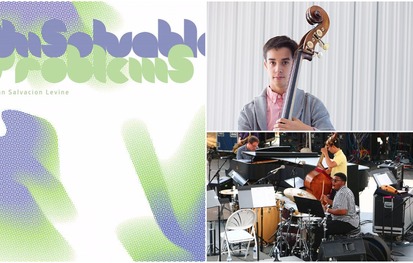 Evan, Kayvon and Lex first met in a University of Michigan rehearsal room in the summer of 2014. Evan and Kayvon were both starting their first semesters at the University, and were performing in the Detroit Jazz Festival with Yuma Uesaka’s ensemble before school started. As soon as the three of them started rehearsing, a musical bond was created that would continue to develop over the next two years. After the Detroit Jazz Festival performance, the trio decided to focus on studying a mix of jazz standards and Original compositions together. Lex is from New York City, Evan is from New Jersey and Kayvon is from Detroit, creating a diverse set of backgrounds. Their influences come from a range of genres, including world music, straight ahead jazz, rock and hip-hop. As the music began to mature and the musicians’ language began to develop, the trio would be featured playing Indecision, by Lex Korten, at the annual Collage concert at U of M. The band would also exhibit an ability to play with electric instruments, with fellow student Andrew Hintzen, at the 2015 Performing Arts Technology Showcase at the University of Michigan. During 2016, the band is continually being featured as a part of the Weber’s Jazz Collective in Ann Arbor. On January 11, 2016, they performed preceding the Royal Philharmonic, at Hill Auditorium. The band is currently recording an album of Original Compositions of Evan and Lex, and was released on March 19th.