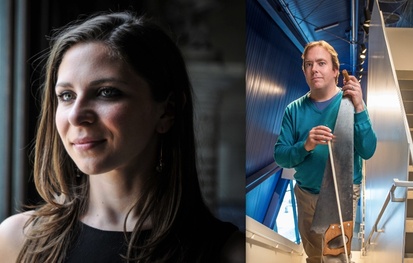 Pianist Brianna Matzke will premiere The Slow Waltzes by composer Christopher Auerbach-Brown. Paradoxes are the soul of this 45-minute work for solo piano - dancing in ultraslow motion, the eye of a storm, a beautiful struggle.

Mr. Auerbach-Brown has been commissioned by such notable institutions and performers as the Cleveland Institute of Art, percussionist Donald Miller of the Cleveland Orchestra, the Finger Lakes Music Educators' Association, Parade the Circle, the Music Settlement, the No Exit ensemble, and the Cleveland Boy Choir. Musicians and ensembles who have performed his music include the Playground Ensemble (Denver, CO), the Cavani String Quartet, the Cleveland Chamber Symphony, guitarist Jason Vieaux, the Sirius String Quartet (New York, NY), saxophonist Andy Carpenter (Chicago, IL), clarinetist Laura Sabo (Cincinnati, OH) clarinetist Amy Advocat (New York, NY) and flautist Carrie Rose (Washington, D.C.). His arrangements of Hasu Patel's works for sitar and orchestra were performed by the Doctors' Orchestra of Houston (Texas), and by the Plymouth Canton Symphony (Michigan). Additionally, he was the recipient of a Charles Ives Scholarship in 1998, given by the American Academy of Arts and Letters to “composition students of great promise.” He is currently composing a work for intonarumori ensemble, conducted by Luciano Chessa.

Additionally, Mr. Auerbach-Brown is active as a sound artist, curator, performer and music educator. His installation Boundaries was presented at SPACES Gallery in November 2011, and he curated a sound art exhibition titled Apopheny-Epiphany at SPACES in May 2014. He conducts the Amati Chamber Orchestra at The Music Settlement and previously taught at Lakeland Community College and the Cleveland Institute of Art. His classes at CIA focused on the connections between contemporary music and sound art with the visual arts, and he led courses in electronic music at LCC. He plays alto saxophone, musical saw, udu, melodica, and throat sings in the chamber collective The Trepanning Trio. Currently, he is the Director of Programs at the Conservancy for Cuyahoga Valley National Park, where he oversees a wide variety of music, arts, and nature-focused programming initiatives.

Mr. Auerbach-Brown is a member of the Cleveland Composers’ Guild and is published by the American Composers’ Alliance. He lives in lovely Cleveland with his wife, son, and daughter. He has a cat who doubles as a guard dog.