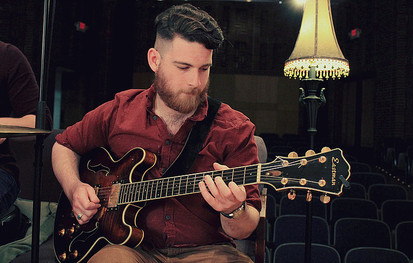 Zakk Jones is a Columbus based guitarist, composer/arranger and teacher, with a B.M. in Jazz Studies from Capital University. Originally from Portland, Oregon, his musical studies started at the age of 6, when he began playing piano and composing original music. His involvement in the Fear No Music project led to a National Award in composition at the age of 11.

Around the same time, Zakk picked up the guitar, first being influenced by rock and metal. He now regularly plays Jazz, Classical, Fusion, Pop and Brazilian styles among others. In his three years on the Columbus scene he has performed at Dick's Den, Worthington Inn, Brother’s Drake Meadery, Rumba Cafe, Park St. Tavern, Natalie’s Coal Fired Pizza, Columbus Performing Arts Center, Columbus Jazz & Ribs Festival, Columbus Commons, farmer’s markets, art galleries, weddings and corporate events. Opportunities to tour have taken him all across the Midwest, and even further to Atlanta, Dallas, San Diego and Louisville for the Jazz Education Network Conference where he has been both a performer and stage manager.

"I created Screeching Owl in early 2015, with the intent of forming a group to perform my original compositions and arrangements. I used my love for all musical styles in writing for the group, with influences ranging from Modern Jazz (Chris Potter, Alex Sipiagin etc.) to Heavy Metal and Drum 'n Bass. My goal was to create accessible, conversational and exciting music! In May ’15 I released our first EP entitled "Dreams of Yesterday" which features 6 original compositions of mine. The group continues to grow, and has an interchanging roster to make each performance a new experience. We have performed often in the Columbus/central Ohio region, and also completed a two week Midwest tour in August ’15. This series of performances in June highlights a touring trio of myself on guitar, Elliot Scozzaro on alto saxophone and David Wolbert on bass, with local guests and artists. Our Bop Stop guest will be Cleveland-native drummer Ryan Folger, who is also an original member of the group.”