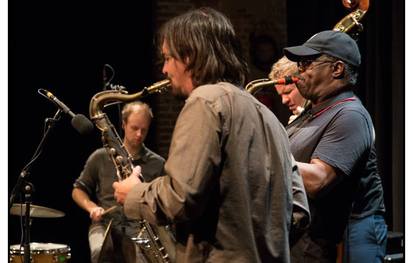 Tonight we feature a trio comprised of Amsterdam-based, American saxophonist John Dikeman and a resourceful and powerful Norwegian rhythm section (bass and drums) featuring players whose other credits include the Frode Gjerstad Trio, Friends & Neighbors, Saka, and the Paal Nilssen-Love Large Unit. The trio presents its own definition of contemporary freely improvised jazz: muscular, passionate, raw and intense music created on the spot, with no distinct leader and with tight, immediate and supportive interplay. Although informed by formative free jazz artists such as pianist Cecil Taylor, saxophonists Coltrane, Ayler and Peter Brötzmann, they demonstrate clear, independent voices of their own.

On this tour as well as on their 2015 Clean Feed label release, Skullduggery, the trio is joined by Joe McPhee, a Miami native who originally played trumpet and, inspired by Ayler (his elder by three years), took up the saxophone. A pioneer in the indie label movement of the 1970s, McPhee released his earliest recordings with painter Craig Johnson's CJR label and, a few years later, with Swiss entrepreneur Werner Uehlinger, whose Hat Hut label remains to this day a leading outlet for European and American free jazz. McPhee's career spans 50 years and over 100 recordings that find him equally at home in European and American structured and free improvised contexts, solo work, small and large ensembles not only with elder peers but also younger musicians like Ken Vandermark and Fred Lonberg-Holm.

Reviewing Skullduggery for allaboutjazz.com, John Sharpe writes: "Dikeman is inspired, but not constrained, by the fire music legacy of Albert Ayler, and this chimes well with McPhee, himself an avowed follower in his early years, and part of an Ayler tribute band with trumpet Roy Campbell. McPhee practices his familiar blend of fire and honey on pocket trumpet and alto saxophone, matched by Dikeman's litany of overblown tenor and baritone shrieks and wails. However the young American also displays a melodic streak, perhaps moved by McPhee's existential promptings. Exciting interaction between the horns forms just one of the strong points of this meeting of minds, as they play off and around each other, while avoiding erecting a claustrophobic wall of sound."