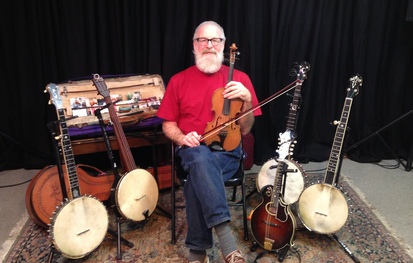 An Evening with Dan Levenson – An intimate evening of musical conversation – is Dan’s one-man show with Clawhammer Banjo, Appalachian Fiddle, songs and stories of life and the road.

Dan Levenson has been a musician most all of his life so far. He was born to and raised in a musical family where his father called square dances and his mother sang and played piano and guitar. Dan’s parents even met at a square dance themselves.

This evening you hear his story told of and through music…Read more about dan and his show!

As a former Cleveland resident, Dan is the founding president of Folknet and an internationally known performer and writer of old time music. He also ran Goose Acres Folk Music Center in the Late 1980’s. This is a wonderful way to come back to the city Dan once called home.