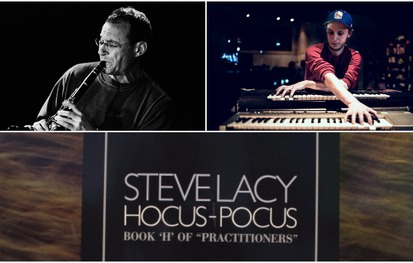 Hocus Pocus (Book H of 'Practitioners') is a collection of six etudes for solo soprano saxophone composed by Steve Lacy. Mr. Lacy writes: "Deliberately made so as to be hard to play, they also contain many of the characteristic 'licks,' which comprise the language that I use." The works are distilled making use of his signature elements of intervallic investigation and repetition. Michael Coleman and Ben Goldberg began studying Hocus Pocus in 2014, adapting the work for the duo of clarinets and piano/keyboards. They have performed the work at ROVA’s Steve Lacy Memorial Concert on June 6, 2014, and at IBeam in New York. Currently Michael and Ben are working on a recording of the piece, which is taking the form of a long dreamlike collage.

From 1992, when his group New Klezmer Trio released Masks and Faces and "kicked open the door for radical experiments with Ashkenazi roots music" (SF Chronicle) to 2013’s simultaneous release of Subatomic Particle Homesick Blues (featuring Joshua Redman) and Unfold Ordinary Mind (featuring Nels Cline), which the New York Times noted for “a feeling of joyous research into the basics of polyphony and collective improvising,” clarinetist and composer Ben Goldberg has shaped a career through relentless pursuit of musical truth across many genres and styles, resulting in the Downbeat Critics’ Poll naming him the #1 Rising Star Clarinetist in both 2011 and 2013.

In 2012 Ben premiered Orphic Machine, a song-cycle with lyrics from the “speculative poetics” of Allen Grossman. Commissioned by Chamber Music America and performed by an all-star nine piece band including Nels Cline, Greg Cohen, and Ches Smith, Orphic Machine is sung by violinist Carla Kihlstedt. The LA Times called Orphic Machine “knotted and occasionally spooky composition marked by dazzling interplay.” The work was released in 2015 on cd and double LP.

Ben is part of Invisible Guy; The Out Louds; Orphic Machine; Unfold Ordinary Mind; Go Home; Ben Goldberg School; and Ben Goldberg Trio with Greg Cohen and Kenny Wollesen. He is a member of the avant-chamber jazz ensemble Tin Hat; and performs in a duo with pianist Myra Melford called DIALOGUE. He currently teaches Jazz Theory and Improvisation in the Music Department at the University of California, Berkeley.

Michael Coleman is a pianist, improviser and composer. He graduated from Oberlin College where he studied history and jazz piano. After graduation, Michael headed out to Oakland, CA where he began his career as a composer and sideman, working with Bay Area greats such as Scott Amendola, Marcus Shelby, and countless other improvising musicians and songwriters.

Michael is the composer and bandleader of the groups Beep!, Arts & Sciences and CavityFang. In his songwriting project Michael Rocketship, Michael plays all of the instruments and utilizes his home studio as a compositional tool. When constructing Young Nudist songs, Michael uses experimental recording techniques to create unique textures and sounds. These are then pieced together to create a jigsaw puzzle of melodies and harmonies that are at once mysterious and familiar.

Apart from performing and touring tirelessly with his own bands, Michael has toured the world with Chris Cohen, tUnE-yArDs, Sean Hayes, Miles Kurosky and Jug Free America.