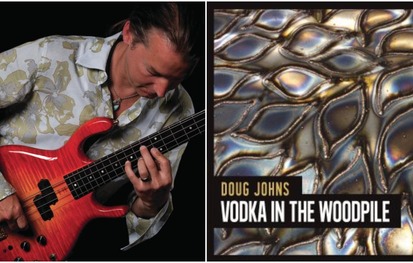 SUPERFUNKYBASSMUSIC is the best way to describe what Doug Johns brings to the stage. With four solo records to date, Doug Johns is poised to celebrate the release of his 5th record "VODKA IN THE WOODPILE" on Saturday July 2, 2016!!! We will host this event with the help of The Bassmint Live. Sets at 7pm and 9pm.

BIO: Musician Doug Johns knows it’s all about the rhythm. After four solo recordings (Doug Johns, Pocket Fulla Nasty, Stank, and Blomp!), Doug is ready to invite listeners inside for his most autobiographical work to date, Vodka in the Woodpile.

Released on April 15, 2016, Vodka in the Woodpile reveals an unexpected new sound for the Cleveland bassist as he shares a sense of his life’s influences beyond the funk-bass standard. Doug kicks off the recording with a banjo in his hands on “Old Woman Creek,” salutes Rock and Roll in an energetic tribute to “Free Ride,” and still doesn’t miss a beat with his classic, full band funky sound in tracks like “Tricerafunk.”

Vodka in the Woodpile features performances with many of Doug Johns’ now-signature artists, including Jordan Simmons on Drums, Kenny Anderson and Joe Miller on Horns, and Oz Noy on Guitar. A special appearance from drummer icon Dennis Chambers and assistant production by Denali are Vodkahighlights not to be missed.

Doug Johns has long been known for his deep groove and his open, sharing approach to music and life. Bass Player Magazine on Johns: “One of the most credit–deserving bass virtuosos in America…it’s his inventiveness that’s consistently compelling.”