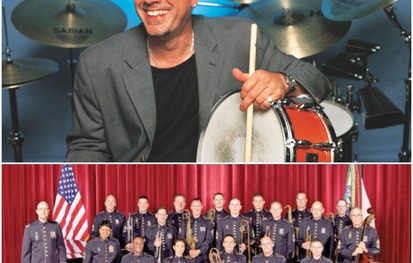 This event is free with a suggested donation of $10!

An exciting evening of Latin, jazz, and beyond at Cleveland's home for jazz, The BOP STOP, with multi-Grammy nominated super drummer, percussionist, composer, arranger Bobby Sanabria, with Cleveland colleagues Dave Thomas on piano and Simon Mastri on acoustic bass! They'll be joined by special invited guests, members of the mighty U.S. Army Jazz Ambassadors Big Band, as well as students from the Roberto Ocasio Latin Jazz Camp. This special BOP STOP event is a prelude to theJuly 8th Roberto Ocasio Foundation Gala KEY BANK sponsored concert of big band Latin jazz featuring the students of the annual Roberto Ocasio Latin Jazz Camp along with the U.S. Army Jazz Ambassadors celebrating the camps 12th year! Join us at the BOP STOP July 7 for an unforgettable evening of Latin, jazz, and beyond!

bobbysanabria.com
BOBBY SANABRIA - Hailed as one of the most versatile and important drummer/percussionist of his time, Bobby Sanabria was born and raised in the South Bronx of Puerto Rican parentage. He is a 7X Grammy nominee as a leader, a drummer, composer, arranger, producer, educator, bandleader and filmmaker. He has performed and recorded with such legends as Maestro Tito Puente, Dizzy Gillespie, Mongo Santamaria, Ray Barretto, Candido, Henry Threadgill, Larry Harlow, and the Godfather of Afro-Cuban Jazz - Mario Bauza' recording three Grammy nominated CD's with him that have defined the Latin jazz big band tradition. His first CD as a leader, N.Y.C. Ache' (1993) with his octet Ascension, brought him worldwide critical acclaim for its pan Latin jazz sound incorporating not only Afro-Cuban elements with jazz but Puerto Rican, Venezuelan, Colombian, folk and spiritual elements as well. His first big band CD as a leader, Live & In Clave!!! (2001) brought him even more acclaim for his revolutionary forward thinking vision. Subsequent CD's - 50 Years of Mambo (2003), Big Band Urban Folktales (2007), Kenya Revisited Live!!! (2009), Tito Puente Masterworks Live!!! (2011), and the recent double Grammy nominated MULTIVERSE (2013) have all been nominated for Grammy's with Big Band Urban Folktales being the first Latin jazz CD to ever reach #1 on the National Jazz Week charts. He was inducted into the Bronx Walk of Fame in 2006 with a permanent street sign with his name on the Bronx's legendary Grand Concourse and his appearance at the 2006 Modern Drummer Festival with his nonet, Ascensión, was spellbinding. DRUM! magazine named him Percussionist of the Year in 2005 and the Jazz Journalists Association voted him Percussionist of the Year in 2011 and 2013. The 2013, 2014, 2015 Downbeat Magazine Critic's and Reader's Poll named him one of the top 10 percussionists in the world. He holds a B.M. from the prestigious Berklee College of Music (1979), being the first Puerto Rican to attend the school in 1975. Bobby is an Associate Professor at the New School for Jazz & Contemporary Music and a Professor at the Manhattan School of Music directing Afro-Cuban Jazz Orchestras at both institutions. With his students at MSM he has been nominated for Grammy's for the aforementioned Kenya Revisited Live!!!, and Tito Puente Masterworks Live!!! CD's - outstanding examples of his work as a jazz educator. He was associate producer and an on air personality for the documentaries, The Palladium: Where Mambo Was King - winner of the IMAGINE award for best cable TV documentary (2003) and PBS's, From Mambo to Hip Hop: A South Bronx Tale - winner of the ALMA award for best documentary (2007) which also featured Bobby as composer for the films soundtrack. In 2009 Maestro Sanabria was an on air personality and consultant for PBS's critically acclaimed 4 part documentary series, Latin Music U.S.A. For his activist role in the fight against the Grammy's, for their cutting of the Latin jazz category, and successfully getting the category reinstated, Bobby was honored by Comite' Noviembre receiving their 2012 Puerto Rican Heritage Award. He is the leader of the critically acclaimed ensembles, Quarteto Aché, Sexteto Ibiano, Ascensión, and the 19 piece multi-Grammy nominated Multiverse Big Band. He is the Artistic Director, Artist In Residence for the Roberto Ocasio Latin Jazz Camp - the only music camp of its camp in the world devoted to teaching Latin jazz for students of high school age, now in its 12th year. Besides performing, teaching, composing, arranging, and conducting, Bobby is the Co-Artistic Director of the Bronx Music Heritage Center.


THE JAZZ AMBASSADORS—AMERICA'S BIG BAND, is the official touring big band of the United States Army. This 19-member ensemble, formed in 1969, has received great acclaim both at home and abroad performing America's original art form, jazz. Concerts by the Jazz Ambassadors are designed to entertain all types of audiences. Custom compositions and arrangements highlight the group's creative talent and gifted soloists. Their diverse repertoire includes big band swing, bebop, Latin, contemporary jazz, standards, popular tunes, Dixieland, vocals, and patriotic selections.The band has appeared in all fifty states, Canada, Mexico, Japan, India, and throughout Europe. Notable performances include concerts at international jazz festivals in Montreux, Switzerland; Newport, Rhode Island; Toronto, Canada; Brussels, Belgium; and the North Sea Jazz Festival in the Netherlands. In 1995, the Jazz Ambassadors performed in England, Wales, Belgium, Luxembourg, and the Czech Republic in commemoration of the fiftieth anniversary of the end of World War II. The band has also been featured in unique joint concerts with major orchestras, including the Detroit and Baltimore symphonies.