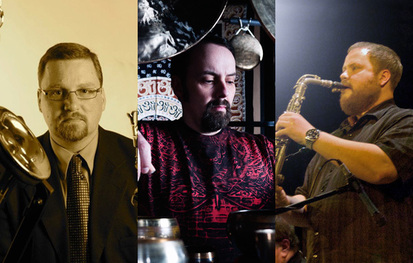 This concert will be a special night for creative music. It will combine compositions and members from two different groups that have percussionist Paul Stranahan in common. Joining Paul will be Three for All tenor saxophonist John Perrine and Night Terrors electric guitarist Tim Mirth.

According to Paul, "When I heard that alto saxophonist Steve Zombory (the third member of Three for All) was unfortunately not going to be able to make the performance, I immediately thought of Tim Mirth. Tim and I have played together in many projects including the progressive metal/jazz band Red Side Visible. John Perrine was also in that band so there is already some chemistry there. Both Tim and John are two of the few musicians who are really good at improvising and playing challenging prepared compositions. Being able to do both and morph in and out of each one is something that really interests me and I'm lucky to get a chance to play with these guys."

Three for All is a collaborative trio which looks to create music that balances intricate pre-composed material with the “instant composition” that we know as improvisation. The group's configuration is singular in that there is no chordal instrument (piano, guitar, etc.) and no pitched bass instrument to outline a traditional harmonic foundation. Indeed, many first-time listeners are struck by the richness of layered sound and implied harmony that can be achieved by tuned drums, gongs, cymbals, and the “singing bowls” that are often used in the service of meditation and healing. Once the twin saxophones are added, the cumulative effect could truly be described as being more than the sum of its parts.

Night Terrors performs like a dream gone awry; giving yourself in is the only reality that makes sense. Fighting the music will leave you scarred, releasing to it will find you safely home, with a memory. Because of the background of musicians Tim Mirth and Paul Stranahan so much music is possible with each passing second. Experimental textures are created with the use of many electronic pedals on the guitar from hauntedly quiet and round to jagged pulsing squeals. The percussion ranges from the harsh sounds of china cymbals to meditative singing bowls to any form of drumming. And then there are the gongs, the marvelous gongs of multiple sizes that can take the listener to a world far more ancient and yet newly rediscovered. A whole host of sounds and feels are possible.

John Perrine, Saxophone, is Director of the Jazz Ensemble and Coordinator of Jazz Studies. He has premiered works by Kari Juusela, Aaron Johnson and William Price. Perrine holds a doctorate from Louisiana State University , a masters from Northwestern University , and a BME from Stetson University . His teachers include James Bishop, Fred Hemke, Jonathon Helton and Griffin Campbell. He has studied jazz with Harold Blanchard, Don Owens, Tony Garcia and Michael Koucour.

Recently, Perrine has performed the Bolcom Concert Suite with the Volga Band (Saratov, Russia). Perrine also gave master classes at the Saratov Conservatory and the Rostov On-Don Conservatory and well as at Moscow State University for Culture and Arts where he has been invited back to perform the Ingolf Dahl Saxophone Concerto. In addition to work abroad Perrine has also recently given live broadcast recitals with faculty members Eric Ziolek, Rock Wehrmann and Mark DeMio on WCLV in Cleveland, Ohio and performed with his own jazz quartet at Night Town (Cleveland Heights) and The Bop Stop (Cleveland, Ohio)

Paul Stranahan (gong array, singing bowls, drums, percussion) is a percussionist, composer, and teacher. He's led his own groups such as the modern jazz Paul Stranahan Trio, the avant/fusion band PSI-Paul Stranahan's Insomnia and the experimental group Night Terrors. Abstract Logix, a progressive instrumental magazine, said of Paul , “ As a drummer leading an ensemble with self-penned compositions Paul is occupying a mantle that few can approach.” A career highlight for Paul was when his trio and Red Side Visible (an avant/metal group Paul plays drums in and composes for) were 2 of the 4 American bands out of hundreds of applicants that were selected to perform in Belfort, France at FIMU (Festival International de Musique Universitaire). He also has a double CD release appropriately called "Gong and Singing Bowl Improvisations" on the Infinite Number of Sounds Label.

Tim Mirth is an Akron, OH musician with a love for everything from jazz to the darkest death metal to the sweet sounds of singer songwriters. Tim began his musical journey at 10 years of age after moving to a new town with no friends. After sneaking up in the attic to play his father’s guitar he instantly became obsessed with the strung instrument and gave up any attempt at other pursuits. The music he created, created him.