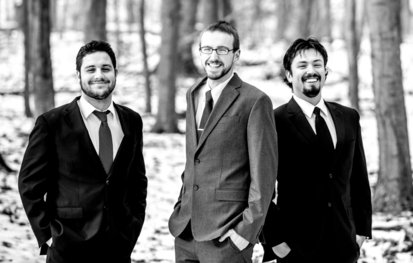 The Corey Kendrick Trio combines the infectious swing of the Oscar Peterson trio and the intricate interaction of the Bill Evans trio with a modern harmonic sensibility to create a truly dynamic group sound. Established while studying under Rodney Whitaker at Michigan State University, theCorey Kendrick Trio has developed their melody-driven, straight ahead sound over two and a half years of extensive performing.

On their debut recording, Rootless, the Trio delves into the themes of life in transition and all the associated emotions, whilst exploring the sonic tapestry of the piano trio. From the anxiety of starting anew (The Unknown/The Unexpected), to the loneliness of an unfamiliar home (Alone InMichigan), to the pure joy of new friends and experiences (Blues al Pastor), to the indescribable emotions of new parenthood (Lullaby For A New Mother), Rootless runs the gamut both in terms of emotional content and stylistic possibilities.

COREY KENDRICK-Piano
An Iowa native, Corey Kendrick is a pianist, composer, and educator living in Detroit, MI. Although soft-spoken and mild-mannered, you wouldn’t know it when he sits down at the piano. A pianist with a deeply expressive touch and formidable technique, Kendrick makes his presence immediately known. Harmonically daring and melodically inventive, Kendrick’s talents have granted him the opportunity to share the stage with some of the finest jazz musicians in the world.

Kendrick received his Master's in Jazz Studies from Michigan State University in 2015 and holds a Bachelor's in Liberal Studies from Southern Illinois University Edwardsville. Kendrick has studied with Xavier Davis, Reggie Thomas, and Willie Pickens.

JOE VASQUEZ-Bass
Joe Vasquez is a young up-and-comer to the music scene and has made a strong impact in keeping the tradition of jazz music alive while still maintaining a modern sound. He recently completed his undergraduate degree in Jazz Studies at Michigan State University under the direction of professor and renowned bassist Rodney Whitaker and is about to complete his master’s work in Jazz Studies this spring. Throughout his six years as a career bassist, Joe has been a part of many notable events including the East Lansing Summer Solstice Jazz Festival, the Lansing Jazz Festival, Detroit Jazz Festival, and Toronto Blues Festival. He has performed throughout the U.S. as well as Canada and Trinidad and Tobago playing with artists such as Dwight Adams,Etienne Charles, Cory Allen, Anthony Stanco, and Diego Rivera. Joe continues to dedicate himself to his bass and his music and looks forward to expanding his musical experiences with more passionate people alike.

NICK BRACEWELL-Dums
Nicholas Bracewell is a Jazz Drummer from Essex, Ontario. He began playing drums at a very young age, initially playing on pots and pans and small drums his mother bought as toys. By the age of 8 he received his first drum kit which sparked his love for the drums. At the age of 11 he was accepted into the Civic Youth Ensembles jazz program in Detroit, Michigan under the direction of Rodney Whitaker. Through this program he received mentorship from Rodney Whitaker, Diego Rivera, Sean Dobbins and Kris Johnson. With the presence of the Michigan State Professors at Civic, the transition to MSU seemed natural. In 2015, he received his Bachelor’s of Music in Jazz Performance at MSU, and is currently studying for his Master’s with Randy Gelispie. He has played at festivals around the U.S. andCanada including the Detroit Jazz Festival, East Lansing Summer Solstice Festival, Lansing Jazz Festival, the Windsor Blues Festival and most recently South by Southwest. He has played with artists such as Randy Napoleon, Rodney Whitaker, Diego Rivera, and Rick Roe.