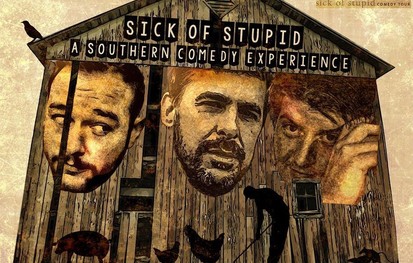 Come on out for a bunch of laughs during the Republican National Convention!!

Tom Simmons, Stewart Huff & Cliff Cash are on the road.

We believe that people are looking for an intelligent voice with a southern accent. “The South” is made up of Miami, Austin, Atlanta, The Research Triangle, New Orleans, Nashville, the Appalachian mountains, The Gulf of Mexico, Charleston, Nashville, Asheville and so many more wonderful, cultured, beautiful cities. Those cities are full of intelligent, progressive, talented, cultured people who don’t want to be grouped in with Duck Dynasty, Honey Boo Boo or Ted Cruz. Much like people in New Jersey don’t want to be lumped in with the Jersey Shore cast. The south has somehow garnered a reputation that pools us all into wearing camouflage and hating gay people. There exists a large portion of the population that doesn’t want to be culled into those categories. Those folks are our demographic. We believe they will love what we have to say. We believe that the antithesis of those stereotypes is something that hasn’t been done yet and the first people to do it successfully can expect a windfall. Intelligent southern comedy exists. We aren’t the first to do it. Some of the best comics ever have come from the south. Bill Hicks was from Texas. It is a genre but it is a genre and a concept without an owner. No one has claimed it. No one has manifested it successfully into a brand or taken it to the mainstream. That is our number one goal. We’d like this intelligent, thought provoking form of southern comedy to be one of the first things people think of when asked about entertainment from the south. We think that can happen one day. One day very soon.