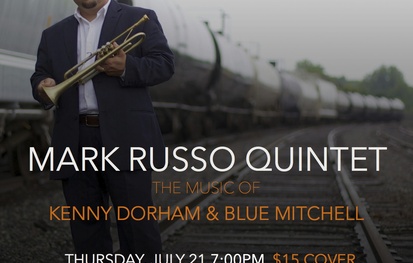 Tonight we welcome Mark Russo and his quintet as they honor the music of Kenny Dorham and Blue Mitchell!

New Affirmation is Mark Russo's debut CD as a leader on the Bugles Media label. It features all original compositions as well as some of the greatest jazz musicians in the Greater Cleveland area.

Mr. Russo is one of the founding members of the Cleveland Jazz Revolution (CJR), an organization of improvising musicians whose goal is to create a stronger sense of community in Cleveland's Jazz Scene by creating a platform to showcase new & original Jazz music that combines tradition, innovation and creative awareness of the explorations of Northeast Ohio's modern jazz musicians as well as a founding member of the Garfield Heights Alumni Jazz Ensemble (GHAJE) which is an ensemble/group dedicated to the advocacy of jazz education in the Garfield Heights City Schools. He has been an adjudicator and Guest Artist for the Stow-Munroe Falls middle School Jazz Festival and the Green Local Jazz Festival. In addition, he has held private studio teaching positions for over 12 years at venues such as Educator’s Music, Brecksville Music, The Aurora School of Music, Garfield Heights High School, The Music Workshop and The Beck Center for the Performing Arts.