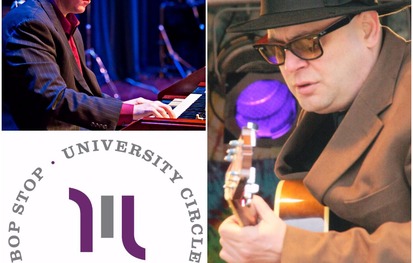 It is always a treat to have a Hammond B3 at the BOP STOP. Join us this evening as guitarist Bob Niederriter leads his jazz duo project which features Jon Eshelman on organ.

Bob Niederriter is an artist/composer who uses a vast assortment of colors and textures to create unexplored universes for the listener. His playing, which shows a definite personality, has a melodic clarity that is pleasing to the ear. Bob Niederriter is a jazz artist. He is a composer, guitarist, and arranger who has studied, and performed with great artists in jazz, modern classical music, and has doggedly pursued excellence in the field immersing himself in the music while seeking inspiration and instruction from the masters including those at The New School Jazz Program in NYC. His Trios, and Quartets have performed at many venues including Blues Alley in Washington DC, and his CD, Full Circle, has been featured on NPR, WBGO, Jazz After Hours with Jim Wilke, and SmarTV from Tri-C.

Jon Eshelman, originally from Columbus, Ohio, began studying with B-3 organist and pianist Hank Marr at age 15. Jon began playing organ and piano around Columbus with a wide variety of groups while studying jazz piano at Ohio State University. After receiving a Bachelor of Music degree in 1999, Jon made his living as a pianist and organist around central Ohio, regularly performing with Gene Walker, Vaughn Wiester’s Famous Jazz Orchestra, Jazz to Go, Yumbambe, Brasilera, Derek Gardner and others. Jon also led the group Kirkatron, a septet devoted to the music of Rahsaan Roland Kirk. In 2002 Jon moved to New Jersey to work on a Masters Degree in jazz piano at Rutgers, studying under pianist Stanley Cowell. While there, Jon gigged regularly with Ralph Bowen, Sean Jones, Lee Hogans, Jerome Jennings, and many others. Jon received his Master of Music degree from Rutgers in 2004. After five years of teaching and playing gigs in New Jersey, New York, and Philadelphia, Jon returned to Columbus in 2007 where he remains active on the local scene.