The Supposed So CD Release / The Singulars @ BOP STOP 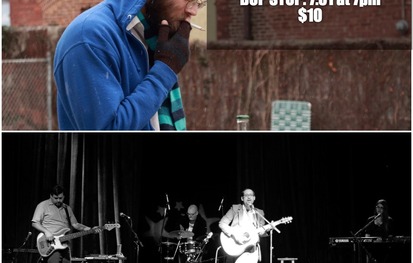 The Supposed So CD Release / The Singulars @ BOP STOP

The Supposed So started in 2009 as a recording vehicle for the songs of Michael McGuire. Influenced by a wide range of artists, The Supposed So couples thoughtful, literate lyrics with new-folk and 60s pop music tendencies. Many songs incorporate layered vocals over a textured backdrop of guitars, keys, and harmonica. Equal parts Merseybeat, Elvis Costello, and Belle and Sebastian.

A self-described workaholic, The Supposed So has written and recorded nearly 200 songs since he released his first album in 2011 - including 5 LPs and 4 EPs last year alone. He is the author of two novels, three books of poetry, and a collection of essays, all published under the pen name, M.C Guire. He was selected as the musical act for 2012's RAW: Natural Born Artists showcase and his album, "All Is Good, Then" was named #27 in Cleveland Music City's Best Albums of 2014.

The Singular is a four piece rock band that produces a sound that straddles the line between ambient indie-rock and modern Americana. This original band has been influenced by artists such as Wilco, Modest Mouse, and Radiohead. They triumph the art of storytelling through song and always invite their audience on a journey full of conflicted characters, apocalyptic overtones, and well crafted musical moments. Terry Mortensen, Miles Cobbs, Mark Bradbourne, Nichole Catalano, and James Pequignot are The Singular.