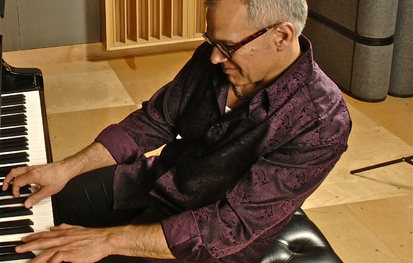 Perhaps best known as musical director for singer Kurt Elling from 1995-2013 Hobgood played on, composed/arranged for and co-produced ten of Elling’s CDs (six for Blue Note and four for Concord), each Grammy® nominated. 2009’s “Dedicated To You: Kurt Elling Sings The Music Of Coltrane and Hartman”, recorded live at Lincoln Center, won the 2010 Grammy Award for Best Vocal Jazz Record, with Hobgood receiving one of the coveted statues for his work as producer.

Hobgood was awarded three consecutive fellowships (‘90, ’91, ’92) to perform in the Aspen Music Festival. The Chicago Tribune honored him as a 1995 Chicagoan Of The Year in the Arts. In 2003 he received a Deems Taylor Award, given by ASCAP for the year’s outstanding music journalism, for his article, “The Art Of The Trio”, published by JazzTimes magazine.

His 2007 CD, “When The Heart Dances” (Naim*), a duet recording with iconic bassist Charlie Haden, has received worldwide critical acclaim, garnering 4-star reviews from Down Beat and the UK’s Mojo magazine among others.

Hobgood’s February 2012 release, POEMJAZZ (Circumstantial**), is an adventurous collaboration with poet Robert Pinsky, the only three-term U.S. Poet Laureate. It features Pinsky’s energetic readings of his poems with an emphasis on musical phrasing (as opposed to “dramatic” phrasing) coupled with Hobgood’s engaging, thematic improvised accompaniment, played live in studio simultaneous with the distinguished poet’s recitations. A second POEMJAZZ record is forthcoming.

Hobgood’s 2013 release “Christmas” was chosen by both the New York Times and the Chicago Tribune as one of the top Holiday CDs of the year. In the New York Times, Nate Chinen said, “For most of this beautifully recorded album, he’s alone at the piano, unspooling solemn reveries after the example of his north star, Keith Jarrett.” And the Chicago Tribune’s Howard Reich wrote, “Can overplayed holiday repertoire be transformed into art? It can when Hobgood is at work, the pianist turning in one of the most appealing recordings of an already distinguished career with ‘Christmas.’”

2013 also saw the debut of the Laurence Hobgood Quintet featuring Ernie Watts. Downbeat magazine’s review of a performance concluded, “Hobgood obviously embraced his leadership role, playfully interacting with the audience and providing insight between each composition. Whatever he ends up doing next with his pen and piano, it will no doubt be swinging. And he’ll have plenty of fans anxiously awaiting to hear his future projects.”

In April and May of 2014 Hobgood began a new collaboration with Chicago vocalist Tammy McCann; arranging, playing and producing Tammy’s “Love Stories” project. The Chicago Tribune’s Howard Reich said of the new pairing:

“Until now, McCann’s luxuriant tone, traditional repertoire and glamorous stage persona have evoked an earlier, more romantic era in jazz history . . . In a single stroke, pianist Hobgood has enabled McCann to recalibrate. Suddenly a singer who seemed to be an upholder of traditions emerged as an artist gently recasting those traditions.”

In December of 2014 Hobgood recorded a new trio project, “Honor Thy Fathers”, with bassist John Patitucci and drummer Kendrick Scott, slated for September, 2015, release. Recorded at New York’s legendary Sear Sound the album features original compositions and novel arrangements of standard and popular tunes (Stevie Wonder’s “If It’s Magic” as an up-tempo burner, for example), each dedicated to one of Hobgood’s personal influences/inspirations.

Hobgood has performed with his own groups, Elling and others at Carnegie Hall, Lincoln Center, John F. Kennedy Center for the Performing Arts, Ozawa Hall at Tanglewood, Chicago’s Symphony Center and Ravinia, Sydney Opera House, London’s Barbican and Queen Elizabeth Halls, as well as the world’s most prestigious jazz festivals including Montreaux, North Sea, Monterey, Spoleto USA, Newport, Umbria, Montreal, JVC festivals in Paris and Japan and many others. Hobgood also appeared with Elling at the 2009 State Dinner given at the White House where President Obama welcomed India’s Prime Minister Manmohan Singh.