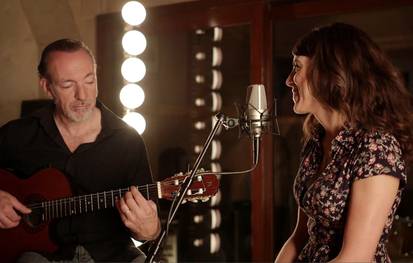 Bringing a touch of artistic elegance to music, Dori and Gretje tap in to the swingin’ fun of The Great American Songbook, alongside beautiful Bossa Nova grooves. Charming, intimate, and exciting, they create magic on stage.

Gretje channels the influence of jazz legends Anita O’Day, Carmen McRae, & Ella Fitzgerald with her own sweet style. She has quickly skyrocketed to become one of LA's freshest and most exciting voices in jazz, and always delivers a not-to-be missed performance!

Complimenting her with his alluring guitar playing is Dori Amarilio, an award-winning composer, producer, & music director. Throughout his career, Dori has had the great pleasure of working with Airto and Flora Purim, Mike Stoller, Moacir Santos, Jeff Hamilton, Earl Palmer, Wayne Shorter, & Mitchell Forman, among many others. He is truly one of the most sought-after and brilliant musicians in his class. "

Gretje, an Akron, OH native and the daughter of jazz drummer Tommy Voorhees, began her music adventure at the age of 5, performing with regional choirs. Interested in the Contrabasso at 8, she joined the school orchestra and jazz band. She continued to study both voice and bass through high school, with an emphasis on classical voice. Upon entering Mount Union College, with a Vocal Performance Scholarship, she took opera as her major. However, being raised and surrounded by jazz musicians, Gretje returned to her roots when she moved to California, studying jazz and performing with some of LA’s finest musicians.

Gretje, whose main influences are Anita O’Day, Chet Baker, Ella Fitzgerald, and Carmen McRae, has quickly become a favourite in the jazz clubs, here, in Los Angeles. She can currently be heard performing with guitarist/music producer, Dori Amarilio, who is producing her much-anticipated upcoming debut album.

In 2013, she joined the Los Angeles Metropolitan Opera Company, and has had the great pleasure of performing Oscar in Un Ballo in Maschera, Tebaldo in Don Carlo, and the Voice of the High Priestess in Aida. She is very much looking forward to her upcoming roles of Pamina in The Magic Flute and Ilia in Idomeneo in the 2016 season with the LAMet.

Whether she’s performing jazz or using her beautiful lyric coloratura soprano voice in an opera, Gretje brings energy and light to each performance she gives.

“Gretje Angell’s voice is like honey on velvet” – Sunny Wilkinson

Dori was born into music in Tel Aviv, Israel. The son of a classically-trained violinist and award-winning composer, he was exposed to music from day one. He studied guitar at age 9, played professionally at 14, composed music at 16 and was a music director by age 17. He studied composition at the Berkley-endorsed School of Music Rimon, the Hollywood Musician’s Institute and the UCLA film scoring program.

Dori landed in Los Angeles after being hired as a musical director for a three-month tour, playing every major city in South America. Performing with top musicians in the L.A. jazz scene earned Dori the reputation as a highly-regarded and extremely versatile guitar player with a special passion for Brazilian music.

Years in recording studios won him awards and the reputation of a sought after composer, producer and highly intuitive score mixer in the Film, TV and Video Game industry. His diverse portfolio features projects that range from working with legendary songwriter Mike Stoller on the album Amazon Moon, to composing for Oscar-winning director Charles Jarot; from scoring a national Pontiac commercial to composing cross-cultural music for theater; from composing cutting edge TV music to producing orchestral soundtracks for major game titles utilizing Hollywood, Seattle and a range of European orchestras.

Overdue for a Grammy nomination, Dori is currently working on a unique project arranging traditional Brazilian music for a full orchestra. The first cut features world renowned percussionist Airto Moreira, with Dori conducting the Seattle symphony. Composing music for pictures is Dori’s primary passion. His scores benefit from his diverse musical background and experience, coupled with the expertise of producing soundtracks for picture. His music can be heard daily on several major network TV shows.