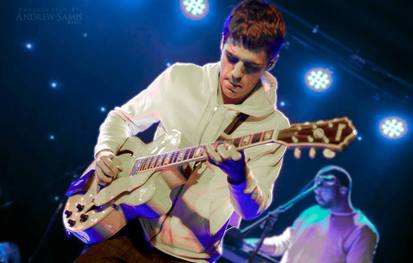 Alex Schrock is a guitarist, composer and teacher in the Columbus area. Originally from Canton, Ohio, Alex began playing bass at age 12, then switched the guitar in high school and never looked back. He received his bachelor’s in music composition from the University of Akron and his master’s in music composition from Cleveland State University. While in Cleveland, Alex studied with Cleveland jazz legends Bob Fraser and Rock Wehrmann. Alex also played in many acclaimed groups in Northeast Ohio, including the Mahavishnu Orchestra Project, Paul Stranahan’s Insomnia and Moises Borges.

Now in Columbus, Alex leads his own groups in addition to being an in demand guitarist for jazz, soul, and hip-hop groups.

For his gig at the BOP STOP Alex leads his trio which features: