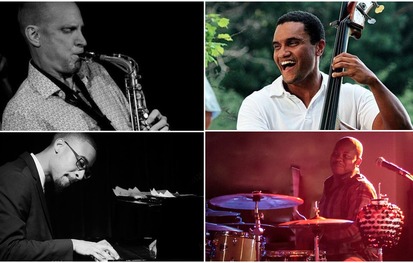 Please join us as we welcome a stellar group to the BOP STOP for an exciting performance of original, new material. This quartet features:

Theron came across an amazing opportunity, when he was encouraged by family and friends; he auditioned for and was cast as young Herbie Hancock in the soon to be released film, Miles Ahead,directed by and starring Don Cheadle. This biopic movie is an intimate look into the life of jazz artist, Miles Davis and is scheduled for release in 2015. Working with Don Cheadle inspired Theron to give more consideration to acting; he someday aspires to share the silver screen with actor Samuel L. Jackson and Morgan Freeman.

Theron currently resides in Akron, Ohio, where he is immensely involved in promoting jazz and classical music.

As a professional jazz bassist for the last ten plus years, Paul has been fortunate enough to have shared the stage with some of music's greatest artists including:

Paul also had the privilege of touring the world with trumpeter Maynard Ferguson as musical director ('97-'99), as well as playing in the late, great saxophonist Stanley Turrentine's last touring group.

James Johnson III began playing the drums at the age of five in his hometown of Pittsburgh, Pennsylvania. James Johnson III’s early music experiences were centered around family life and shaped by the music of the church. His father, Dr. James Johnson Jr., a nationally known pianist and educator, sparked his passion for music. Johnson attended CAPA -- Pittsburgh’s high school for the creative and performing arts. It was here he came under the mentorship of the drummer Roger Humphries.

In 1999 James was invited to tour with jazz legend Ahmad Jamal for many years. With Ahmad, James has performed all over the world, appearing in major jazz venues and festivals. As a member of the Ahmad Jamal trio, James has performed in some places such as the Cully jazz festival in Switzerland, the North Sea jazz festival in South Africa and the Dublin jazz festival and many others. Mr. Johnson has performed with the Jazz at Lincoln Center Orchestra with Wynton Marsalis. James has played with jazz greats such as George Coleman, James Moody, Kenny Garrett, Benny Golson, Mulgrew Miller, Russell Ferrante, Bob Mintzer and Kenny Werner. James released his first solo album in 2014 entitled Between. James is presently working as head of the drum department at the AfroAmerican-Music-Institute in Pittsburgh, Pennsylvania. He is also serves as artist in residence at Pitt University’s music department working with various jazz ensembles under the direction of Geri Allen. James also spends a great deal of time producing music for national and local artists.