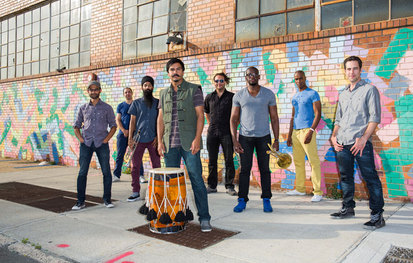 Famously dubbed “The best party band in years” by NPR, Red Baraat is a pioneering eight-piece band from Brooklyn, New York. Conceived by dhol player Sunny Jain, the group has drawn worldwide praise for its singular sound — a merging of hard driving North Indian Bhangra with elements of go-go, rock and jazz — fueled by 3 master rhythm makers, the muscle of horns, a raucous guitar and a booming sousaphone. Created with no less a purposeful agenda than manifesting joy and unity in all people, Red Baraat’s spirit is worn brightly on its sweaty and hard-worked sleeve. And is being returned to them in cities all over the world, as word spreads of the band’s incredibly powerful live performances.

Livewire, the band’s 2016 EP, is a 5-track scorcher recorded in-studio at Seattle’s KEXP. While still retaining many of the propulsive and uplifting musical elements that red their previous albums, Livewire marks a departure for Red Baraat as their acoustic instrumentation evolves into new sonic spaces. Notably, the songs on the EP feature dark electric guitar textures and live eects processing from sousaphone and the dhol, the band's signature instrument. The EP concludes with a bonus track ("Gaadi of Truth") featuring the drumming and remixing talents of The Police's Stewart Copeland.

The release of Red Baraat’s 2nd album in 2012, Shruggy Ji, which debuted at #1 on the Billboard World Music charts propelled the band on a nonstop three-year world tour that included performances at Bonnaroo, Austin City Limits, Monterey Jazz Festival and WOMAD, along with clubs, theatres, and arts centers. Along the way, they sold out rooms as diverse as the Luxembourg Philharmonic and the Bowery Ballroom, and performed at the request of The White House, Peter Gabriel, TED and the Olympic Games.

But even as it’s clear that Red Baraat is building a startling history of performances in iconic settings, the band’s bread and butter remains the sweaty clubs, festivals, packed performing arts centers, and college auditoriums that have kept the band on the road all over the world for over 1100 shows to date in their 7 years as a band. It’s here where Red Baraat does what it does best - communing with their audience in a joyful, near hedonistic celebration of music and dance, which tellingly, draws a crowd even more diverse than the players on stage. The universality of what Red Baraat does is undeniable. And this is no happy accident. It is the product of intention and design. Says Jain, “The band…our songs…are addressing the multiplicity of viewpoints,” says Jain. “There’s ‘Zindabad,’ which means ‘Long Live’ in Hindi. In that song, we’re saying that we celebrate life, we celebrate devotion — but we also celebrate agitation and revolution. Question things, and move forward, and support your friends and lovers, and listen to the voice of your heart. Long live all of that; but at the same time, we’re talking about community, about responsibility, about helping one another. We are simple creatures that desire community. If we can unite people of all backgrounds and ethnicities to partake in the exuberance of life through the universal language of music, then life is that much sweeter.”