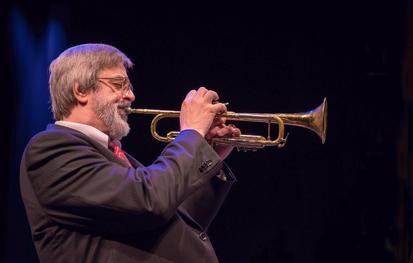 The Cleveland Greats Concert Series, curated by Aidan Plank, features and celebrates the great musical contributions of musicians residing in the Cleveland area. Featured artists include notable performers, educators, and mentors to the musicians on the current Cleveland jazz scene as well as musicians spread throughout the world. The concerts feature musical selections from the featured artist as well as anecdotes and insights about jazz music and Cleveland history.

Jack Schantz was artistic director of the Cleveland Jazz Orchestra from 1994 to 2009. Since 1999 he has served as Director of Jazz Studies at the University of Akron. In the 1980’s Jack performed national and international tours as jazz trumpet soloist with the Tommy Dorsey Orchestra, the Glenn Miller Orchestra, the Artie Shaw Orchestra, and the Woody Herman Thundering Herd. After coming off the road he worked as a free-lance musician, playing in the pit orchestras for many shows at Playhouse Square, including Miss Saigon, Showboat, City of Angles, Man of LaMancha, Annie Get Your Gun, Guys and Dolls, Kiss of the Spider Woman, Anything Goes, The Sound of Music, The Color Purple, The Drowsy Chaperone, Hair, and Porgy and Bess. He also has performed in concerts with artists such as Mel Torme, Sarah Vaughan, Tony Bennett, Cleo Laine, Jack Jones, Nancy Wilson and Diane Schuur. He has been a member of the Cleveland Pops Orchestra, the Blossom Festival Orchestra, and the Blossom Festival Band. He led the Jack Schantz Jazz Unit in the ‘90s, and recorded the CD Choices with that group. He has also recorded with Oscar Peterson (The Christmas Album), and the Grammy Award winning Turned To Blue with Nancy Wilson. Other recordings include The Way of the Sly Man with Dave Morgan, Come Right In with Phil Woods, Speechless and I Love To Tell The Story with his own quartet. While serving as artistic director of the CJO, he worked with arranger/composers Billy Byers, Bob Brookmeyer, Bill Finegan. Bill Holman, Slide Hampton, Gerald Wilson, Sammy Nestico, Bob Florence, Frank Foster, Maria Schnieder, and Rob McConnell. CJO recordings under his leadership are Traditions, Swingin ’Together with Sammy Nestico, and The Surprise of Being with Joe Lovano (recorded live at Birdland in NYC). In 2015 he was invited to perform at the International Trumpet Guild conference. In June of last year he gave concerts and masterclasses in Casablanca, Fez, Rabat, and Khouribga Morocco under the auspices of the U.S. State Department. In November of 2015 he was invited to be the featured performer/lecturer at the Trumpets of The World festival in Belo Horizonte, Brazil.