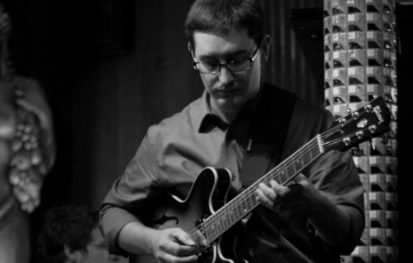 Join us for a wonderful evening of arrangements of jazz standards and original music as we present Daniel Bruce and his trio.

By embracing the influence of his heroes from the jazz tradition and retaining his own musical personality, guitarist Daniel Bruce has developed a unique and impressive musical voice. He is active as a performer, recording artist, composer and educator. He moved to Chicago in 2007, after finishing his master’s degree in jazz studies at the University of North Texas. He was quickly performing at a number of the city’s finest jazz venues including The Green Mill, The Jazz Showcase, and Harris Theatre in Millennium Park.

As a jazz performer and recording artist, Daniel Bruce has had the opportunity to work with a number of eminent musicians including Ali Jackson, Dan Wall, Lynn Seaton, The Cleveland Jazz Orchestra, Marvin Stamm, and Dave Restivo. He has been a featured composer in Fingerstyle Guitar Magazine, and remains a regular contributor. Daniel released A Single Thread, his first album as a leader, in 2008 on NohJoh records.

Daniel has held faculty positions at Muskingum College, Cuyahoga Community College, Harold Washington College, St. Xavier University, and Interlochen Center for the Arts. Bruce was awarded a Teaching Fellowship upon entrance to UNT where he taught applied jazz guitar lessons, directed two guitar ensembles and a student big band while pursuing his own studies at the University.