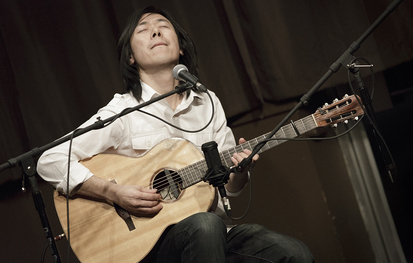 Hiroya Tsukamoto performs solo guitar that takes us on an innovative, impressionistic journey filled with earthy, organic soundscapes that impart a mood of peace and tranquility.

Hiroya Tsukamoto is a one of a kind composer, guitarist and singer-songwriter from Kyoto, Japan. He began playing the five-string banjo when he was thirteen, and took up the guitar shortly after. In 1994, Hiroya entered The Osaka University and while at college in Japan, Hiroya was introduced to a musical and social movement in South America called Nueva Cancion headed by musical legends such as Victor Jara and Violeta Parra.

In 2000, Hiroya received a scholarship to Berklee College of Music and came to the United States. He is also the recipient of the Professional Music Achievement Award. Hiroya completed a debut album entitiled "The Other Side of the World" with his band INTEROCEANICO and released in 2004. His composition entitled "El Otro Lado del Mundo" was nominated as the finalist of The USA Songwriting Competition 2004 and "Samba de Siempre" in 2005, also "Seventh Night" is the finalist of International Acoustic Music Award in 2006. Hiroya released his second album entitled "Confluencia" in 2006 and the third album "Where the River Shines" in 2008.

Hiroya has been leading concerts with his group including several appearances at Blue Note in New York and he performed with Esperanza Spalding, Marta Gomez, Kendrick Scott(The Crusadors), Pete Kennedy(The Kennedys) and Dave Maxwell(Muddy Waters Band).

"HiroyaTsukamoto takes us to an impressionistic journey " -Boston Herald