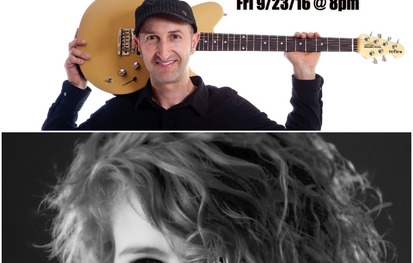 The Sicilian Jazz Project returns to the BOP STOP with special guest (from Palermo via Brooklyn) Laura Campisi on vocals.

Michael Occhipinti’s Sicilian Jazz Project has been dazzling audiences world-wide with its intriguing mix of Sicilian folk material and the best elements of modern jazz, world music, funk, blues, and chamber music. Using Sicilian folk music as its starting point, the group takes the audience on a journey that reveals the drama and passion of Sicily’s past and showcase the global sound and great musicianship of modern day Toronto, Canada.

The Sicilian Jazz Project has been called “a masterpiece of cultural fusion” and received a 2009 JUNO Award nomination (Canada’s Grammy Award). The recording also resulted in the prestigious Ragusani nel Mondo Award being presented to Michael and Roberto Occhipinti in Ragusa, Sicily in 2009, and in 2010 Michael Occhipinti received a Chalmers Fellowship to live in Sicily and explore the folk culture there further.

The Sicilian Jazz Festival has brought its captivating and infectious live show to music festivals across Canada, Italy, the USA, and Mexico. Mixing a unique repertoire, great story-telling, and some of Canada’s best jazz and world music musicians, the band is not to be missed live. The Sicilian Jazz Project is now working on a follow-up to its acclaimed debut, to be completed in 2013.

An eight-time JUNO Award (Canada’s Grammy) nominee for Best Contemporary Jazz Album, Michael Occhipinti is a modern guitarist/composer interested in creative music of all kinds, and this approach has earned him an array of listeners and the respect of critics and musicians. As a leader of the jazz orchestra NOJO, Shine On: The Universe of John Lennon, and numerous other projects, Michael has established himself as an inventive composer/arranger, and his recording Creation Dream – The Songs of Bruce Cockburn was singled out by National Public Radio in the U.S. as an essential recording for Americans interested in Canada. Michael has worked with some of the most celebrated names in jazz, including clarinetist Don Byron and the late Sam Rivers, who each recorded and toured with NOJO, and Joe Lovano, Ray Anderson, Kenny Wheeler, and saxophonist Jeff Coffin (Dave Matthews Band), who is featured on Michael’s group The Triodes Chunked. Michael Occhipinti’s newest recording Shine On: The Universe of John Lennon was named a Top Pick of 2012 by Jazz FM.

Michael Occhipinti - guitarist and arranger
An eight-time Juno Award nominee for Best Contemporary Jazz Album, guitarist/composer Michael Occhipinti’s modern and eclectic approach to jazz and creative music of all kinds has earned him a broad array of listeners and the respect of critics and musicians alike. As a leader of the acclaimed jazz orchestra NOJO, his own quintet, and The Sicilian Project, Michael has established himself as an inventive composer and arranger, and his recordingCreation Dream – The Songs of Bruce Cockburnremains a favourite instrumental jazz recording among critics and fans.

Chasing After Light, Michael’s 2008 JUNO nominated recording, features the same stellar quintet of musicians heard on Creation Dream. This new recording departs from the songs of Bruce Cockburn by showcasing Michael’s original compositions and by showing off a broad palette of guitar sounds, including a particularly impassioned solo that one critic praised as “face melting.” Blending a variety of folk sounds (Cuban music, African blues, and a beautiful Bruce Cockburn inspired acoustic guitar composition) with a modern melodic approach to jazz improvisation, Chasing After Light was recently praised bythe CBC’s Errol Nazereth as one of the best jazz recordings of 2007. Michael Occhipinti is now busy arranging new music for the Sicilian Project, which has just completed its debut recording.

Roberto Occhipinti - bass
Rare is the bassist who steps forward to lead his own ensemble. Rarer still is the bandleader who successfully bridges the worlds of jazz and classical music. Roberto Occhipinti clearly belongs to that rare breed. On his first album, 2001’s Trinacria, Occhipinti explored the range of Latin jazz. His followup album, 2003’s The Cusp, expanded on the concept, adding violin, flutes, reeds and horns while tackling composers as diverse as Wayne Shorter, Jimi Hendrix and Giacomo Puccini. On his most recent release Yemaya, Occhipinti has given full flight to his musical vision, employing horns and a full string symphony orchestra on classical arrangements of Cuban, Brazilian and original jazz pieces.

Born in Toronto of Sicilian ancestry, Occhipinti has long straddled the worlds of jazz and classical music. He has been a member of the Winnipeg Symphony, Hamilton Philharmonic and Canadian Opera Company orchestras. Meanwhile, Occhipinti has toured and recorded with Jane Bunnett, including the Juno Award winning Ritmo and Soul and the Grammy nominated Alma de Santiago. At the same time, he has recorded a number of albums with pianist Hilario Durán, including the Juno Award winning New Danzon, which the bassist also produced. Occhipinti has skillfully married his classical training with his abiding passion for jazz and world music. In doing so, he has set himself apart as an innovator, as well as one of Canada’s most versatile and adventurous musicians.

Dominc Mancuso – vocals
Canadian born vocalist Dominic Mancuso has been exploring his Sicilian roots for many years, and has performed at music festivals throughout Italy, while at the same time building a successful career for himself in his native Toronto as an English language performer and composer. Comfortable singing in the older dialects that make up much of Sicily’s folk music, Dominic has also delved deeply into the work of Italy’s contemporary songwriters, and hi s mastery of this music will be showcased on a new CD he has just finished recording. Dominic Mancuso is also involved in creating innovative multi-media concerts featuring the real-time projected visual work of his painter brother Vincent Mancuso, and the Mancuso brothers’ unique presetation of music and visual art will be featured at the 2007 Nuit Blanche in Toronto.

As a leader Barry’s projects have continually striven to push the boundaries of improvised music. Whether it be the ultra modern sounds of the MRC Trio, the rhythmic complexity of Inside Out (with Lorne Lofsky and Kieran Overs), the acoustic beauty of the Geoff Young Trio, the impressionistic Three Sisters, or the eclectic sounds of Random Access, a four volume studio set exposing Romberg’s personal journey into the world of spontaneous composition, his drumming has an energy and personality that is unique. Barry Romberg has been featured on over fifty recordings, including those by Al Henderson, Nancy Walker, Michael Occhipinti and Creation Dream, NOJO, Chris Tarry, and many others.

Louis Simão – Accordion
Louis Simão has been performing and recording as a multi-instrumentalist for over a decade. Performing on bass, piano, accordion, and percussion allows him to move freely through genres. Louis studied jazz piano and acoustic bass at Toronto’s York University, and abroad with bossa nova guitarist Alfredo Machado at Escola de Música Vila Lobos in Rio de Janeiro, Brazil. He has also been studied in Cuba, Morocco, and Lisbon, Portugal - his parent's home country.

Simão's diverse and highly sought after skills have afforded him the opportunity to perform and record with talented artists such as, Nelly Furtado, Mary Margaret O'Hara, Eliana Cuevas, Michael Occhipinti, The Clayton/Scott Group, and Fritz McIntyre of Simply Red. He also leads, writes and arranges for his own world-music ensemble, Pedras da Rua, which has opened for Cesaria Evora and Celso Machado, and has shared a night with Brazilian reggae stars Chico Cesar and Rita Ribeiro at The Blueprints Arts Festival 2000, the performance of which became the subject of a documentary for Bravo's Centre Stage Chronicles. A remix of Pedras da Rua's "Terra do Bravo" is also featured on Required Listening Vol. #1, voted best Toronto disc of 2003 by NOW Magazine.

Louis Simão's original music ranges from Portuguese folk songs and fado, to samba, bossa nova and other Brazilian genres; from African and Cuban music, to funk and jazz. With som livre (free sound) at the heart of his musical philosophy, Simão's compositions combine these various sounds along with an improvisational sensibility. His most recent CD with saxophonist and composer David French is entitled Faia, and showcases Louis Simao’s talents as a guitarist and as a vocalist singing in Portuguese.

Ernie Tollar - flute and saxophone
Ernie Tollar has created music in many jazz, world, and contemporary settings. His work as a performer, composer, and producer has been heard across Canada and abroad at concerts, clubs, and festivals and on recordings. As an active member of the world music scene in Toronto, Ernie can be heard with such groups as Greek/Arabic ensemble Maza Maze, Table player Ravi Naimpally’s group Tasa, the Maryem Tollar group, Brenna MacCrimmon's Altin yildez Orkestar, The Toronto Tabla Ensemble, The Evergreen Club Gamelan, The Flying Bulgar Klezmer Band and Ron Allen's Ritual Party.

As a jazz and improvising musician, Ernie has appeared with such respected musicians as David Restivo, Rick Lazar, Hugh Marsh, Levon Ichkhanian, and the big band NOJO, with whom Ernie has performed since 1994. With Co-leader John Gzowski, Ernie leads the world jazz group Mecca. Ernie has toured Canada and the U.S. with kora/piano player Daniel Janke’s West African influenced jazz group. He has also worked with such luminaries as Bob Becker and John Wyre of Nexus fame. Ernie has studied South Indian classical drumming and singing with professor Trichy Sankaran and flute with Maestro N. Ramani in S. India.

Kevin Turcotte – trumpet
A perennial winner of Canada’s National Jazz Award and its predecessor the Jazz Report Award, Kevin is a creative and versatile musician who performs in some of this country’s most acclaimed ensembles. His own group The Great Uncles of The Revolution (with Andrew Downing, Jesse Zubot and Steve Dawson) is a JUNO Award winner, and Kevin has also toured with his unique trio featuring Justin Haynes on guitar and Jean Martin on drums. A member of many groups, including Michael Occhipinti’s Creation Dream, NOJO, Time Warp, The Boss Brass, The Michelle Gregoire quintet, The Roberto Occhipinti quintet, The Dave McMurdo Big Band, and The Dave Young quintet, Kevin is one of the most in-demand trumpet players in Canada.