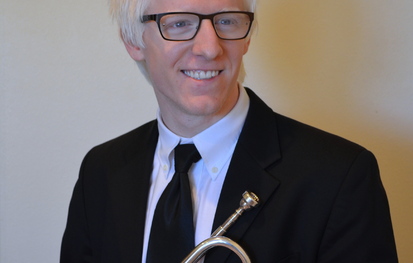 We welcome you to join us for an afternoon of new music featuring solo trumpet and electronics! This event is free but donations are greatly appreciated.

Etienne Massicotte is a trumpeter, composer, and teacher based in Cleveland, Ohio. A graduate of The College of Wooster (2012) and McGill University (2014), Etienne enjoys cultivating a variety of diverse interests through his work.

Fascinated by many forms of new and unusual music, Etienne is currently engaged with the Tesla Orchestra of Case Western Reserve University, composing and arranging music for an upcoming performance to feature three musicians of the Cleveland Orchestra and a spectacular array of lightning-emitting beacons known as Tesla Coils.

Etienne has performed with the CityMusic Cleveland Chamber Orchestra, the Mansfield, Ashland, and Wooster symphonies, the Ohio Light Opera Festival Orchestra, the Scatch Anderson Orchestra, the True North Big Band, and he is the trumpeter in residence at Transfiguration Parish in Lakewood, Ohio.

Etienne is a member of Polars, a Cleveland-based indie rock group who released their debut EP in October 2015, available on Spotify. Polars has performed for the NEOCycle Music Festival, the SoFar Cleveland concert series, and at Burning River Music Festival 2016, among many others. More information on upcoming performances and tour dates is available at polarsmusic.com.

Etienne is humbled by the opportunity to share, discuss, and offer this new and unusual repertoire as a contribution to the rich and diverse musical culture of Northeast Ohio.