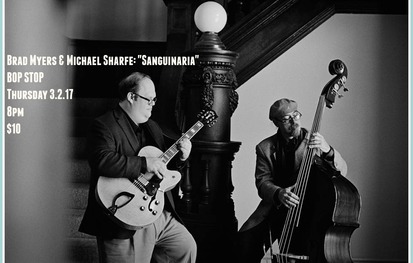 The elements of interplay and synergy are fundamental to the essence of the finest jazz expression. With Sanguinaria (Hopefulsongs) the brilliant tandem of guitarist Brad Myers and bassist Michael Sharfe embrace these elements to perfection. What began as a musical conversation a few years ago when they began playing together in their hometown Cincinnati has flowered into full bloom with this stunning collaboration. And the blossoming metaphor is fully appropriate.

In addition to our shared roots, for both of us, music was – has always been – in our blood. The bloodroot plant, whose delicate white flowers bloom in spring, is a metaphor for our collaboration. That the plant sometimes produces a rare double flower seemed symbolic of our duo format. When the plant’s root is pierced or broken, it bleeds a reddish sap, which also accounts for its Latin name Sanguinaria.

Even more to the point, sanguine means hopeful and optimistic, and aria means an expressive melody or song – which brings us to the core of this beautifully expressive and compelling album. Twelve captivating songs – six by iconic jazz composers; four by Myers; and two provided by respected colleagues –receive enchanting interpretations, focused on beauty, joy and a powerful sense of hopeful inspiration. The mutual feelings of loving expressiveness and emotional warmth embodied by Brad and Mike through this music are palpable and uplifting – further enhanced by the remarkable virtuosity that is fully at their command.

I think of the collaboration between Mike and me as a conversation and a dance. The essence of it, for me, is very yin and yang, but instead of one of us being yin to the other’s yang, each of us possesses both yin and yang.

While there are four additional musicians participating in various places on the album – drummer/ percussionists Dan Dorff Jr., Tom Buckley and Marc Wolfley on two or three pieces each, and Dan Karlsberg playing melodica on one – this is truly a pas de deux of aural motion with Myers on acoustic and electric guitars as well as guitar bongos; and Sharfe on double bass, fretless electric bass and percussion. That Brad has some experience as an electric bassist and Mike studied classical guitar adds another layer of understanding and sharing to the music. The way they stimulate and feed off each other is breathtaking, making it impossible to really tell what is arranged and what is essentially telepathic.

Categories are pointless – ballads that aren’t just ballads; blues that aren’t simply blues; drivers that aren’t always drivers; and swing that isn’t only swing – as pieces shift and morph and transform from moment to moment without contrivance or disruption of the journey undertaken. Each song must be taken entirely on its own terms without any preconception. Outside of one splendid solo bass excursion and the consummate, ultra-sensitive supporting contributions of the guests, the listener should also dismiss standard notions of soloing and accompanying between Brad and Mike as they shift in and out of those modes as the moment and the story being told demands.

Imagine a sumptuous Japanese meal, with a dozen dishes, each perfectly prepared to be all that it can be, but also crafted to complement and enhance each of the other dishes to both stand alone and in harmony – and that pretty well captures the heart and soul of this album. It makes one wish that there was some new form of technology that would allow you to shift back and forth between elements of each song the way one would sample different delights from each dish at will during the meal.

The repertoire was selected with that same sense of harmony, imaginatively arranged by the two men either individually or together. The six pieces by the eminent jazz composers are conceived in an inspired original fashion while fully maintaining the integrity of the composers’ intent – Gerry Mulligan’s Line for Lyons in a walking groove; Steve Swallow’s Falling Grace alternating between unison and call-and-response; Jim Hall’s Waltz New as a vivid homage to his own many duo endeavors; Mike’s inspired double bass solo on Keith Jarrett’s Country; a Latin-ish 6/8 treatment of Vince Guaraldi’s Great Pumpkin Waltz; and a spirited jaunt in straightforward fashion on Dave Brubeck’s In Your Own Sweet Way that closes out the album.

Two songs that were offered to Mike by their composers after performing together are Steve Cardenas’ New Moon, a beautiful balled that begins like a gentle rain and brews into a bit of a storm; and A Feeling Inspired by Maria, a deeply beauteous paean by Paul Bollenback that is recorded here for the very first time.

Myers’ four compositions include the title tune that opens the album in rubato before taking a decidedly Brazilian turn with touches of Bach and Stevie Wonder in tow; the light and playful bounce on In from Somewhere that re-imagines Out of Nowhere; the deliciously suspended and rapid fire line of Norm’s Ridge inspired by Myers’ major influence, Pat Metheny; and the grooving Bentley’s Blues reprised from Myers’ acclaimed previous album, the outstanding Prime Numbers.

At a time in our world where hope is a most precious and needed substance, the extraordinary Sanguinaria (Hopefulsongs) is a marvelous way to obtain some.